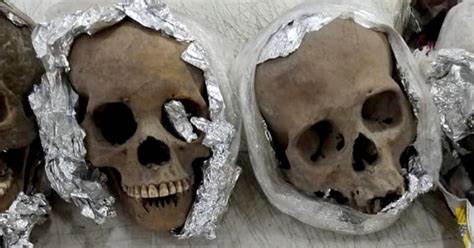 Four human skulls were found in a package in Mexico that was due to be shipped to the US, authorities said.

Mexico’s National Guard said its officers were called to an airport in the city of Queretaro after an X-ray detected strange shapes in a cardboard box.

The box was being sent from the southern city of Apaztingan, in Michoacan state, to an address in Manning, South Carolina.

When they opened the box, they found four human skulls wrapped in plastic and aluminium foil.

It is unclear why they were being shipped or how they were obtained, but authorities say it may violate Mexican laws.

Michoacan is one of Mexico’s most violent states, and the city of Apatzingan has long been dominated by the Viagras drug cartel.

One Facebook the Guardia Nacional wrote: “During inspections at packaging companies and through an X-ray team, the #NationalGuardia detected at the Intercontinental Airport of #Querétaro, four skulls apparently of human origin, wrapped in transparent plastic and aluminium paper minio, no health record.”

Last May, we reported how a pile of 150 skulls sparked a murder probe after their discovery in a Mexican cave.

However, it turned out they were actually the remains of women sacrificed to the Aztec gods thousands of years ago.

The historic find was made close to the Guatemalan border in an area plagued with violent smuggling gangs.

Investigators thought the decapitated skulls were unfortunate victims of ruthless local gangsters and launched a probe to uncover how the remains got there, the Daily Star reports.

After 10 years of extensive tests, experts learned that women were not murder victims, but human sacrifices beheaded during rituals to the Aztec gods millennia ago.

A spokesperson for INAH, the Mexican National Institute of Anthropology and History, said: “Believing they were looking at a crime scene, investigators collected the bones and started examining them in Tuxtla Gutierrez”, the state capital.