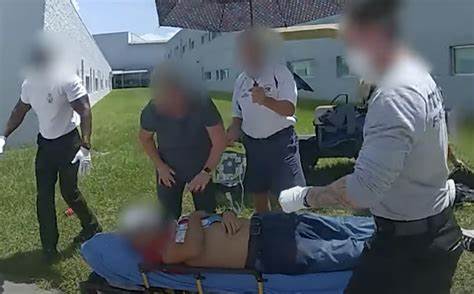 A body camera footage shows a school resource deputy using a defibrillator to save the life of a teen student who collapsed after having difficulty breathing at Wharton High School in Tampa, Florida.

The student was breathing irregularly before collapsing outside campus on August 17, according to a statement released by the Hillsborough County Sheriff Office.

No details were disclosed about what caused the student’s medical emergency.

One of the students on site alerted school staff about the issue who responded accordingly where the school nurse came to help the student shortly before she called Master Deputy William Mellana, the School Resource Deputy at Wharton High School, for assistance.

“He didn’t really show any signs of being responsive other than some weird breathing,” Mellana recalled, NBC’s News Channel 8 reported on Friday. “The nurse did most of the work, she did everything, she was there first, she responded well, she did what needed to be done, along with a few other people at the school who were super compassionate and quick to respond.”

Mellana went to get the defibrillator to send shock to the teen’s chest and and several minutes of administered CPR before Tampa Fire Rescue arrived at the school.

“We got it there quick, we attached it, it advised we should shock him which made it real and then started giving CPR. We gave him CPR until EMS showed up,” he said.

The student was transferred to AdventHealth Wesley Chapel hospital after stabilizing to receive additional medical attention where he later recovered and was released, according to the Sheriff Office.

Hillsborough County Sheriff Chad Chronister praised Mellana’s actions, saying in the statement: “There is no better reward in doing our jobs than being able to help someone and especially save someone’s life. Deputy Mellana’s actions are a shining example of the heroism and composure under pressure that law enforcement officers must display every day.”

“We are incredibly grateful that the first aid training each of our deputies receives was able to help this young man make it back home to his family,” Chronister added.