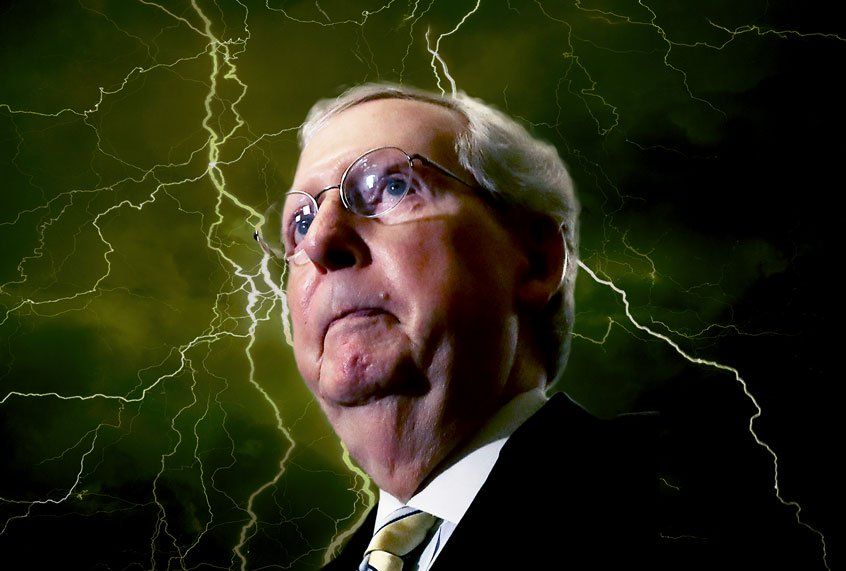 Democrats were skeptical throughout the process. Many warned that McConnell, R-Ky., would inevitably swoop in to scuttle a deal and said the party should pass a bill on its own rather than waste valuable time. Yet McConnell voted to open debate, a sign that the infrastructure deal is likely to have his all-important blessing once the final text is released, and possibly his vote.

“It’s guaranteed to be the kind of legislation that no member on either side of the aisle will think is perfect, but it’s an important basic duty of government,” McConnell said Thursday, adding that the country “would benefit a whole lot” from a targeted investment in infrastructure.

Sen. Brian Schatz, D-Hawaii, said: “I was a little surprised. I’m happy if I’m wrong. His record is clear: He has great enthusiasm for killing Democratic legislation. If this proves to be the exception, that’s fantastic.”

McConnell’s incentives are more complicated than the “Dr. No” image he has cultivated over a decade and a half as the Senate Republican leader, according to senators and aides familiar with his thinking, as well as Democratic antagonists. By acquiescing to a deal, he can reward Republican allies, head off Democratic efforts to end the filibuster and even score some popular goodies for his state.

Here’s what they believe is driving his approach.

Infrastructure is a longtime priority for many members. Top McConnell allies, like retiring Sen. Rob Portman, R-Ohio, are heavily invested in a deal. A group of Republican moderates who have stuck with McConnell through tumultuous years want to prove they can govern with Democrats. And even some Republicans who are unlikely to vote for a bill might not be too upset if it passes.

“I don’t like to speak to what his motives are, but I do think Mitch would like a good thing to happen. And infrastructure is the political safe zone,” Sen. Kevin Cramer, R-N.D., said in an interview. “Sometimes we forget that in addition to being the minority leader he’s the senior senator from Kentucky and he’s got a constituency.”

Democrats were likely to advance an infrastructure bill with or without Republicans. If McConnell had stopped a bipartisan deal, he might have denied Republicans a seat at the table to make sure their priorities were addressed and pare the total cost.

McConnell’s office noted that the parameters he laid out from the start — including a cost of about $600 billion and no tax increases — had been met by the working group.

The issue also has unique appeal to McConnell, who showcases federally funded projects he has secured for Kentucky whenever he’s up for re-election. Last year, he asked voters for their support to help the state “punch above its weight” and cited infrastructure projects as proof that he can use his leadership position to do so.

A GOP strategist said McConnell’s hero is Henry Clay, the 19th century senator from Kentucky who championed an “American System” to boost the economy that included subsidies for infrastructure.

Democrats are under enormous pressure to blow up the Senate filibuster, which allows the Republican minority to block legislation with just 41 votes. McConnell has used it to thwart progressive priorities like voting rights legislation, and it serves as a powerful tool to resist legislation on issues like gun control, labor and immigration.

The two Democrats fighting to protect the filibuster are Joe Manchin of West Virginia and Kyrsten Sinema of Arizona, who say it promotes bipartisanship. They also happen to be authors of the infrastructure agreement. If everything hits a standstill and Republicans take the blame, their argument weakens.

Cramer said that protecting the filibuster is “hugely important” to McConnell and that an infrastructure deal could help save it. “It becomes a very clear demonstration that blowing up the filibuster is not necessary to get big things done,” he said.

That’s especially important after McConnell took a huge risk antagonizing Democrats by blocking a separate bipartisan deal to investigate the Jan. 6 attack on the Capitol.

It barely costs him with the base

Despite some statements by former President Donald Trump bashing the deal this week, GOP voters have so far not been fired up about the issue. A Republican senator said Trump’s missives have had “almost zero impact” on the negotiation or the vote count.

McConnell “sees this as a reasonable bipartisan effort,” said Sen. Lindsey Graham, R-S.C. “I respect President Trump, but I think a lot of us believe that if we can get a reasonable deal that’s paid for, let’s do it. It’d be good for the country.”

While some Republican senators are privately concerned that conservative media have portrayed the infrastructure deal poorly, it’s still a far cry from 2009, when Republicans weighing whether to work with Democrats on a health care bill were confronted with enraged constituents at town halls and an army of conservative commentators warning that it would ruin the country.

Even Trump hasn’t identified anything in the deal that he opposes, instead complaining that it would help President Joe Biden politically and make it easier to pass the rest of his agenda.

While a deal might give Biden a victory, Republicans say it’s not a zero-sum game.

“The only question politically was and remains for some people: Are we handing a victory to Joe Biden? And the answer is yes! Yes, we are! But the victory for Joe Biden doesn’t require somebody else to be a loser,” Cramer said. “That’s what’s so safe about infrastructure.”

The party faces headwinds next year from moderate voters who were repelled by Trump and may be difficult to attract as long as he and his allies remain the faces of the party.

A bipartisan infrastructure deal could provide an ideal talking point for candidates who need to differentiate themselves from the MAGA brand and showcase their pragmatism.

It also might help attract stronger candidates, especially governors like Chris Sununu in New Hampshire and Larry Hogan in Maryland, by showing that Republicans can do fulfilling work even in the opposition.

“You have to assume he’s doing what’s best for his 2022ers and work backwards from there,” said progressive strategist Adam Jentleson, a longtime McConnell critic. “In the past, that has always been obstruction. Now, maybe he needs a dash of cooperation to show voters and potential recruits like Sununu that Republicans aren’t totally crazy.”

The more Machiavellian take from strategists on both sides is that McConnell believes there’s a better chance that Democrats will implode and fail to pass most of Biden’s agenda if Republicans don’t get in their way.

But the GOP is divided, as Democratic leaders have pledged to pass the infrastructure bill alongside a $3.5 trillion budget plan that would address climate, health care, education, taxes and more. By separating moderate priorities on infrastructure into their own bill, House Speaker Nancy Pelosi, D-California, could hold it hostage in the House until moderates like Manchin agree to their demands.

Sen. Ted Cruz, R-Texas, who voted against proceeding to the bill, said he saw it as a “down payment” on the Democrats’ multitrillion-dollar package.

But denying Democrats a convenient villain to unite against might make them more likely to turn on one another. With a 50-50 Senate and a three-seat margin in the House, keeping everyone on the same page is a huge challenge.

Already, Democrats who have been working on related issues for years, like House Transportation Committee Chair Peter DeFazio of Oregon, are mad that they were cut out of talks. When it comes to the reconciliation bill, progressives want to go as big as possible and worry that senators will cut out their priorities, especially on climate. Moderates warn that the $3.5 trillion framework proposed by Democratic leaders may be too rich for their blood.

Sinema previewed the dynamic when she announced that she opposed spending $3.5 trillion even as she agreed to advance a budget resolution that included that number. Rep. Alexandria Ocasio-Cortez of New York, a critical progressive vote, threatened to leave her infrastructure deal to rot in the House in response.

Watching this exchange? McConnell, who said he “was certainly pleased” by Sinema’s stance, calling her “very courageous.”

One thought on “Why is McConnell, the ‘Grim Reaper’, Backing a Biden Priority?”