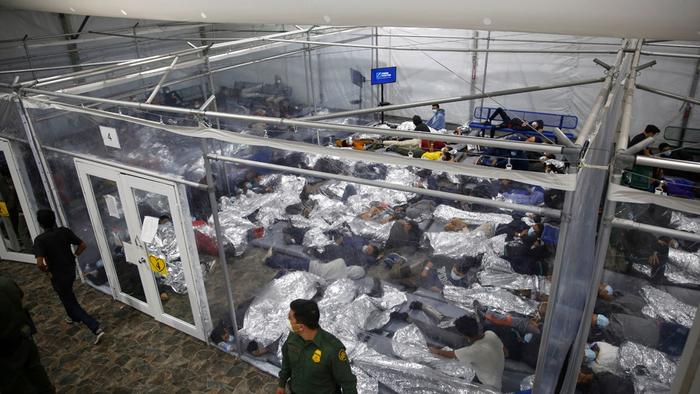 Two more whistleblowers have come forward to allege that children were mistreated by contractors and senior federal employee managers at a Department Health and Human Services migrant shelter in Fort Bliss, Texas, earlier this year, and also say HHS told them to downplay hundreds of Covid infections among children held at the facility.

“Covid was widespread among children and eventually spread to many employees. Hundreds of children contracted Covid in the overcrowded conditions. Adequate masks were not consistently provided to children, nor was their use consistently enforced,” the whistleblowers, Arthur Pearlstein and Lauren Reinhold, said in a federal whistleblower complaint filed Wednesday

But at the end of their service, they said, federal detailees were regularly given written instructions from HHS public affairs that told them, “when asked, to make everything sound positive about the Fort Bliss experience and to play down anything negative.”

At a town hall with employees, a senior manager from the U.S. Public Health Service refused to share the rate of infections, explaining that he did not want the number to end up reported by the media, they said.

Pearlstein and Reinhold are federal employees who volunteered to be detailed to the shelter when the Biden administration ramped up staffing to accommodate the influx of unaccompanied children crossing the border by building emergency intake shelters like Fort Bliss and others.

NBC News previously reported that Servpro, a company that specializes in disaster cleanup and has no child welfare experience, oversaw the care of nearly 5,000 children in Ft. Bliss in early May and June.

In their complaint, which was filed by lawyers from the Government Accountability Project, Pearlstein and Reinhold said two other contractors in addition to Servpro — Chenega Corporation and Rapid Deployment Inc. — also handled the close to $1 billion in contracts the federal government paid to operate Fort Bliss. None of the three companies had child care experience and they did not properly vet applicants to be sure they had relevant experience, they said.

As a result, federal detailees with no background in child psychology were asked to interview more than 5,000 children to assess whether they needed special attention due to a history of abuse or exposure to sex or labor trafficking. It was not clear from the complaint which company or government manager made the decision to staff the interviews with inexperienced workers.

“They did their level best, flagging those who required special attention,” Pearlstein and Reinhold said. Only after assessing over 5,000 children were the workers reassigned because management determined they were not “qualified to do clinical assessment.”

Neither Chenega Corporation nor Rapid Deployment Inc. responded to requests for comment.

A spokesperson for Servpro previously said a franchise holder operated the contract and the company “immediately advised the franchise operator that these are not approved Servpro offerings.”

“We have been informed by the franchise operator that it is no longer providing these services through the Servpro franchise,” Servpro spokeswoman Kim Brooks said July 7.

In a statement, an HHS spokesperson said, “The care and well-being of children in our custody continues to be a top priority for HHS. Currently, children at the Emergency Intake Site at Fort Bliss meet with a case manager weekly and we have close to 60 mental health and behavioral counselors on site working with the children. It remains our policy to swiftly report any alleged instances of wrongdoing to the appropriate authorities.”

Pearlstein and Reinhold also said the contractors gave children false hopes of reuniting with family members only to pull them back at the last minute, even taking children out of lines for buses and off airplanes before takeoff.

They also alleged there was widespread lice in girls’ tents that was left untreated. And in May, they said, there were riots in some of the boys’ tents.

“Ms. Reinhold witnessed security contractors surrounding a tent during one incident. Detailees were never briefed about the riots or trained on how to act in the event a riot broke out,” the complaint said.

They were not specific about which company was to blame for giving children false hope, manage lice outbreaks or riot response.

Pearlstein and Reinhold said they voiced their concern to Chenega about children having no clean underwear.

“The problem persisted for weeks and months,” they said. “Each time the answer was that the shipments had not come in.”

Chenega employees told Pearlstein and Reinhold they were aware of the problem, but they were discouraged by a senior federal manager from purchasing underwear for children on their own with federal business credit cards.

One thought on “Whistleblowers: We were told to downplay Covid spread at kids shelter”