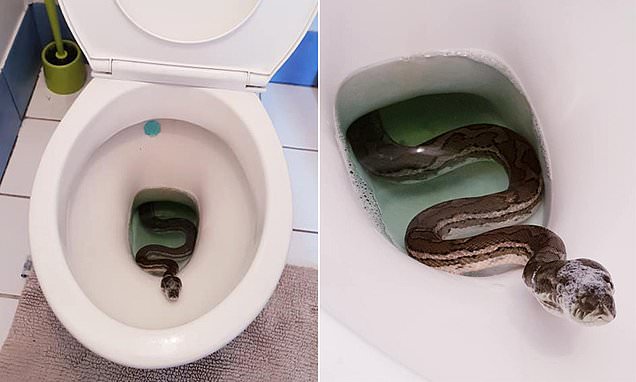 A professional snake catcher had to be called to a property in Australia this week after the resident found a python hiding inside their toilet.

Wolf Brown is the operator of Tableland Snake Catchers, a wildlife removal and relocation service based in Queensland, Australia.

In a Facebook post on Wednesday, Brown said he does not usually post photos taken of customers’ homes, but felt compelled to ask permission on this occasion because “this has to be seen to be believed.”

Brown said that when he first received a call of a snake in a customer’s toilet earlier that day, he assumed he would find it on the floor of the bathroom.

However, when he arrived he found the “almost two meter long” female jungle carpet python hiding inside the toilet bowl with the lid shut. Brown said: “Imagine that surprise.”

The snake catcher said: “After safely securing the snake we checked out the plumbing situation outside to find an open inspection point. It was only a short crawl up to the toilet.

“This is not the first time we have encountered this situation, but an open inspection port was a thing in common.

Video: Huge python sparks panic after it was found hiding under a pick-up truck (Newsflare)

“So, boys and girls, remember: ‘Keep it neat and shut the seat’. And probably turn the light on first!”

As of Thursday morning, the post had been shared over 130 times.

Jungle carpet pythons are vividly coloured snakes that can grow to more than 2 meters (6.5 feet) in length. They are not venomous to humans.

Jungle carpet pythons kill by constricting their prey. Their prey tends to be small mammals as well as birds, frogs, and lizards.

This is not the first time this month that Australian snake catchers have found pythons hanging out in unusual places.

On June 11, Queensland-based Sunshine Coast Snake Catchers 24/7 posted a video to Facebook documenting how staff were called to relocate a carpet python that was hanging from a tree at the back of a café.

In the comment section of the post, the group explained the snake was “scaring customers away” and that they had been called to safely relocate it.

The video shows how a snake catcher manages to pry the snake, estimated to be just over 6 feet long, out of the tree with one hand placed right behind its head.

The snake is then taken away from the café and released into some bushland to avoid the car park and busy road nearby.

2 thoughts on “Python Found Under Toilet Seat Lid in Home”