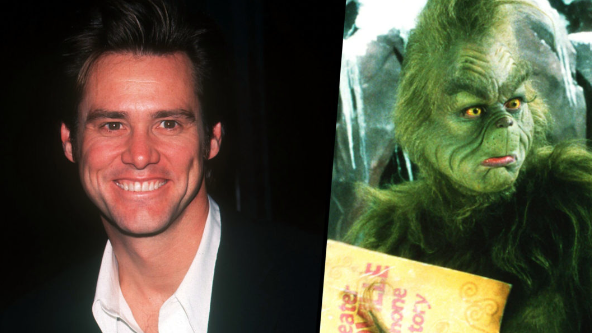 Speaking on The Graham Norton Show, Carrey explained that the make-up element of becoming The Grinch was like being ‘buried alive’.

Explaining how it came about, Carrey revealed he had been struggling with the make-up required to transform into The Grinch.

“The first day was eight and a half hours and I went back to my trailer and put my leg through the wall and I told Ron Howard I couldn’t do the movie,” said Carrey.

“Then Brian Grazer came in, being the fix it man, and came up with a brilliant idea to hire a gentleman trained to teach CIA operatives how to endure torture.

“And that’s how I got through The Grinch.”

He explained the advice given by the CIA expert was to “eat everything you see. If you’re freaking out and you start to spiral downwards, turn the television on, change a pattern, have someone you know come up and smack you in the head, punch yourself in the leg or smoke as much as you possibly can.”

Carrey explained he went through the gruelling make-up process 100 times throughout filming.

Producer Grazer also spoke about the incident, explaining to The Daily Beast that the idea had suddenly come to him.

“I have a particular curiosity about the world of intelligence, spies, terrorism, and counter-terrorism. As we were frantically trying to fix our Grinch problem, a curiosity conversation I’d had suddenly popped to mind,” he said.

“One of the CIA people I’d talked to years before specialized in training US agents to survive torture if they were captured.

“We had an actor being held prisoner by his costume – he was being tortured by his makeup. Maybe the CIA specialist could teach Jim Carrey to survive the green Grinch makeup the way he’d taught spies to survive hostile interrogation?

“We flew the CIA specialist in on a Friday, and he spent the whole weekend closeted with Jim. He taught Jim all kinds of techniques for distracting himself, for creating mindsets that allowed him to ignore and work through the discomfort.

“Years later, Jim described those sessions as ‘quite hilarious.’ But they worked. Jim came back to the set, he put on the Grinch makeup 100 times – every day for months. ‘I just kept telling myself, ‘It’s for the kids! It’s for the kids!’”