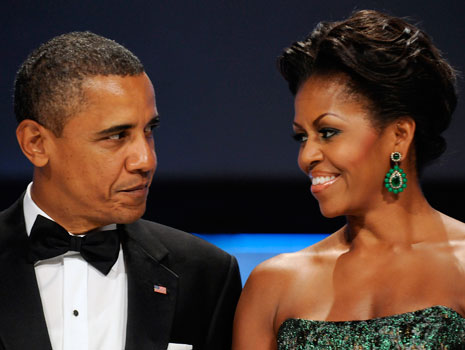 Michelle Obama had expectations for her first visit to Hawaii with then-boyfriend Barack Obama ― and the future president shattered them all.

The former first lady told Jimmy Kimmel on Monday that she was a second-year law associate dreading another Chicago winter when Obama invited her to meet his grandparents, “Toot” (Madelyn Dunham) and “Gramps” (Stanley Dunham), for Christmas in Hawaii.

She had never been but had seen the iconic “Brady Bunch” episodes there. She pictured leis and hula dancing, and anticipated having cocktails and long walks on the beach.

But the reality proved entirely different. “I don’t see a beach anywhere. I don’t see Greg Brady. I see nothing that I was expecting,” the “Becoming” author recalled.

She said she quickly became entrenched in Toot and Gramps’ routine. They ate tuna and sweet-pickle sandwiches two days in a row on TV trays. They did jigsaw puzzles and watched “60 Minutes” on the third.

And all she kept thinking was, “Dude, where’s the romantic stuff?” she said. Until she had an epiphany.

“I thought romance and love was mai tais and sunsets on the beach but Barack was showing me that family was important, that he showed up for his family and he continued to show up for our family in the same way,” Obama said.

Her anecdote came by way of her new book, “The Light We Carry,” and a chapter called “Partnering Well.”

Check out what she had to say about her husband’s pals ― or “old stoner friends from the neighborhood” as Kimmel called them ― who visit when the Obamas take their annual holiday vacation.

WATCH THE INTERVIEW BELOW: