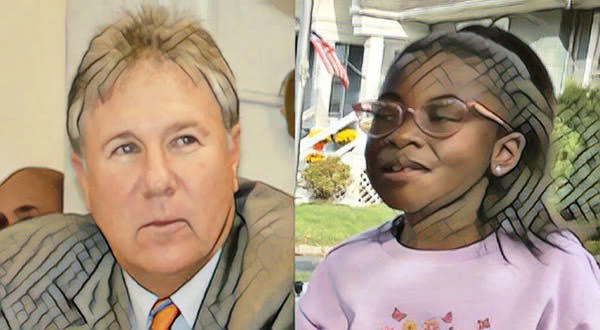 A former New Jersey councilman has come under fire for calling the police on his neighbor — a 9-year-old black girl — who was walking around killing spotted lanternflies.

Gordan Lawshe called the non-emergency line to report there was a “little black woman walking and spraying stuff on the sidewalks and trees” in Caldwell.

“I don’t know what the hell she’s doing,” he added, according to bodycam footage obtained by CNN. “Scares me, though.”

When an officer arrived, he found the “little black woman” was actually 9-year-old Bobbi Wilson, who had been doing her part to try to eradicate the invasive species.

As the officer approaches, she shows him a jug she’s using to catch the harmful insects.

The officer then tells her mother, Monique Joseph, that their neighbor had called.

“Are you serious?” Joseph asks the officer, moments after telling him their neighbor, a former local councilman, “could’ve just rang the bell.”

“Yeah, I guess he saw — I’m not sure. I’m not sure,” the officer replies. “You’re obviously next-door neighbors.”

The officer tells the girl she is “obviously fine.” The 9-year-old then asks if she’s in trouble, and he tells her no.

It’s unclear when the incident happened.

New Jersey has a “Stomp It Out” campaign to encourage residents to kill the invasive spotted lanternflies, which are harmful to plants and trees.

After learning of the danger the spotted lanternfly poses to trees and plants in her community, Bobbi made it her mission to try to kill as many of the insects as she could. Her remarkable efforts were even the subject of an article in her local newspaper, the Progress.

After chatting with Joseph and her daughter, the officer goes to talk to Lawshe, and explains that the young girl was catching and killing lanternflies.

“What a weirdo, huh?” Lawshe can be heard saying in the video.

The girl’s mother spoke out about the incident during an Oct. 22 city council meeting, telling borough leaders, “Racism, intentional or not, is still racism.”

“My neighbor’s words put my daughter in harm’s way. His words and actions were unconscionable, and the impact of the aftermath of this incident will not be kept secret. My 9-year-old daughter was afraid to go outside her front door the next day. She was afraid that her neighbor that she knows has a reason, unknown to her, to call the police on her,” Joseph said, according to the Daily Beast.

Joseph said she wanted this to be a “teachable moment” for the town on racial bias. She and her daughter have since toured the West Caldwell Police Department and engaged in a discussion on race relations.

Following the incident, she also requested a meeting with her neighbor, but Lawshe never responded. An attorney he hired told the Daily Beast that her claim that her daughter is now afraid of police is “absurd” and that he was not engaging in racial profiling.