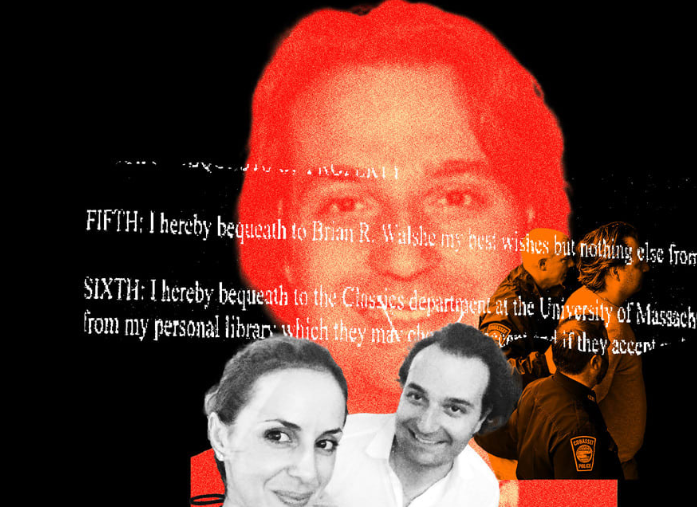 The husband of a Massachusetts woman who vanished mysteriously on New Year’s Day so thoroughly alienated his own father with lies and deception that the older man refused to have any further contact with him for the remainder of his life, according to a close family friend.

The friend, a longtime pal of Brian Reza Walshe’s dad, neurologist Thomas Moorecraft Walshe III, has known the 47-year-old business consultant and convicted art fraudster since he was a young boy, he told The Daily Beast. The primary details of his allegations are backed up by court records filed three years ago in a dispute over the elder Walshe’s will.

“His dad was my best friend, and I know everything about Brian,” the friend, who asked not to be named for fear of retribution, said Tuesday. “I was his father’s closest confidant, there is nothing I don’t know about. And the story is not pretty.”

Walshe was arrested on Monday on charges of misleading investigators looking into the disappearance of his wife, Ana, a 39-year-old real estate executive and mother of three. She left the couple’s Cohasset home in the early-morning hours of Jan. 1 to catch a ride to Logan Airport for a work trip to Washington, D.C., Walshe told police. But Ana Walshe never got on a flight that day, and cops believe she never even made it into the rideshare her husband claimed she had booked.

Detectives later discovered blood and a bloody knife in the basement of the Walshes’ house, and prosecutors said Monday in court that Walshe spent some $450 on mops, tarps, tape, buckets, and drop cloths at Home Depot the day after Ana went missing. She has not been found, and Walshe, who pleaded not guilty to the accusation of lying to police, has not been charged in her disappearance.

Walshe, who has been under home detention for the past seven months while awaiting sentencing on federal wire fraud charges, “never thought the rules applied to him, like he was above it all,” the friend recalled. “He only wore, even as a young teenager, leather loafers and slacks. He only wanted the finest things in life. He just lived in this fantasyland, that he was, like, a prince.”

The friend said Walshe called his father “Daddy” well into his 30s, which he found slightly odd. But the two always got along well, and “there was nothing in [Walshe’s] personality that I ever saw that made me think of him as a violent person,” the friend continued. “I never saw him raise his voice to his father, never saw them argue.” Thomas, for his part, “was the epitome of a southern gentleman,” according to the friend. “Very low-key, very on one plane all the time. No highs, no lows, no anger. I was Tom’s best friend for 40 years, he raised his voice to me once, when I got lost driving.”

However, Brian Walshe allegedly had a hidden nasty streak that emerged in front of another friend of his father’s and is included in an affidavit filed amid a 2019 court battle over Thomas Walshe’s will.

“I… went on a trip to China with Brian and Tom and my partner at the time,” Dr. Fred Pescatore, creator of the Hamptons Diet, wrote in the filing. “I witnessed firsthand what Brian was capable of. I saw Brian attempt to smuggle out antiquities from China. When Brian was confronted, he picked up a stanchion and literally attempted to kill four or five guards that had come to talk to him about his crime. Brian is not only a sociopath but also a very angry and physically violent person.”

(Pescatore did not respond to a request for comment on Tuesday.)

Walshe was allegedly diagnosed as such during an extended stay at a psychiatric hospital after dropping out of Carnegie-Mellon University during his freshman year, according to a separate affidavit filed during the probate proceedings by another one of Thomas Walshe’s acquaintances.

The elder Walshe had a stroke in 2016, and his health subsequently began to decline, according to the affidavit. He and his son had become estranged more than a decade earlier, when Brian allegedly absconded with more than $800,000 from the refinancing of his father’s home, the affidavit states.

“Tom very clearly told me that he told Brian, ‘Your [sic] my son and I will always hope for the best for you but I do not want to re-engage,’” the affidavit states. “If I did I know I would be letting mayhem back into my life and I can’t have that.”

It continues, “This would be in line with what Tom told me maybe 6 or 7 years ago, that when Brian had been a long term patient at Austen Riggs Center-Psychiatric Hospital, he was diagnosed as a sociopath, and this would never change.”

The family friend knew Brian had had what he described as “a mild breakdown” at school, but chalked it up to the pressures of being away at college for the first time, he told The Daily Beast.

“I just thought it was a simple case, but it was obviously much more severe than that,” he said.

Throughout all of his son’s troubles, “Tom never judged him, never belittled him, never expressed anger to me about where Brian was in life,” the friend went on. “He was always supportive, and that’s what makes it so despicable. And that’s what makes it sociopathic. Everything was as good as it could be, given these setbacks. And yet, underneath, it was this unbelievable treachery and complete disregard for his father.”

At the time Brian allegedly made off with the money, his dad was overwhelmingly concerned for his only child.

“Keep in mind, Tom is waiting for a FedEx [with the check] the next day, and it didn’t come, and he calls Brian and Brian is nowhere to be found,” the friend said. “And that lasted more than 10 years. His father was beside himself: ‘What happened to my son? Did he get kidnapped? Murdered? Did he have a gambling problem I didn’t know about?’”

And yet, the friend said, Thomas “never despised Brian” and continued to insist his son would never have taken the money.

The aftermath was, in the friend’s description, “a horror show.” Thomas’ house went into foreclosure, his credit was destroyed, and he had to put off his retirement to stay afloat financially.

“So there was financial devastation, and then the heartbreak of what his son had done to him,” the friend said, noting that there “were no warning signs that Brian would ever do something like this to his father, that’s how smooth a character he was.”

Thomas wanted “nothing to do with” Brian after this, and in the winter of 2009-2010, asked his nephew Andrew to be the executor of his estate. After Thomas’ death, Brian broke into his deceased father’s home and physically destroyed his will, according to an affidavit Andrew submitted to the court during the probate controversy, which also accuses Brian of looting his father’s assets, including artwork he had collected, and selling everything off to fund his side of the legal fight.

“The theft [by] his only son was tragic, not only in that it occurred but also that Brian R. Walshe essentially disappeared from his father’s life purposefully,” the affidavit states. “Dr. Thomas Walshe was left unable to contact his son… who had stolen and turned his back on his father, who had provided a comfortable life for his son.” (The Daily Beast was unable to reach Andrew Walshe for comment.)

Others also began distancing themselves from Walshe, including a colleague of his father’s who, when asked by Pescatore if he would be willing to be involved with administering Thomas’ estate, allegedly said, “Brian is an evil person and capable of just about anything and I want nothing to do with this so please do not involve me.”

Nevertheless, Walshe managed to get himself appointed to oversee the estate, claiming his father hadn’t left a will. However, a friend his dad’s happened to have gone to Thomas’ house and took a photograph of the will before Brian trashed it, undercutting Brian’s claims, according to a filing by prosecutors in the art fraud case.

Walshe claimed in an affidavit in probate court that he had been estranged from his father before his death because he didn’t approve of his “alternative lifestyle,” a claim Thomas’ friends hotly disputed. In reality, Thomas cut him off and excised him from his will after the theft.

“I hereby bequeath to Brian R. Walshe my very best wishes but nothing else from my estate,” it reads.

Instead, Thomas left the bulk of his estate to his sister Barbara, who lived in subsidized housing at the time, according to the filing. He let Fred Pescatore have a house he owned in Montserrat, for half the price he originally paid for it, along with a single-engine Cessna four-seater registered in Antigua. And Brian, who always bounced between jobs, continued financing his high-flying lifestyle through theft, duping friends, classmates, and associates out of large sums, according to prosecutors in the art fraud case.

Walshe, who is said to have shown no emotion when informed of his father’s death, was never charged criminally for the alleged $800,000 theft from his dad. Now, with his wife’s disappearance and his subsequent arrest, Walshe’s legal situation has become vastly more complex.

His attorney, Tracy Miner, declined to comment on the allegations by Walshe’s father and friends. In an email on Wednesday, Miner’s assistant told The Daily Beast, “Ms. Miner is not commenting on the case or giving press statements or interviews. Her focus is on defending Mr. Walshe in court.”