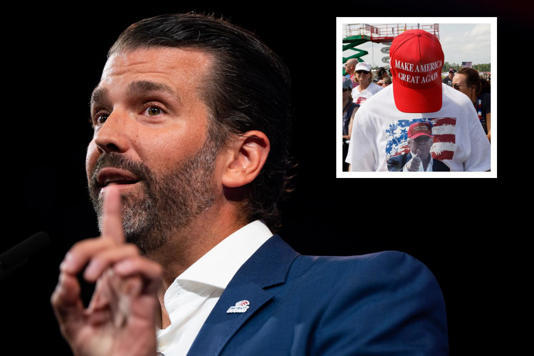 The eldest son of former President Donald Trump posted about the speaker vote on Twitter in response to a tweet from journalist Jake Sherman. The original message from Sherman—the co-founder of Punchbowl News—mentioned how some of the more conservative members of Congress were planning to block McCarthy from the speaker position.

Sherman wrote that Republican Representatives Matt Gaetz of Florida, Lauren Boebert of Colorado and Scott Perry of Pennsylvania said they “don’t mind” if Democratic Representative Hakeem Jeffries of New York was elected speaker over McCarthy. The Republican lawmakers, who in the past aligned themselves with Trump Sr. and his MAGA movement, said “they wanted their OWN legal entity in House to wage lawsuits,” according to Sherman.

“We all want House leadership to be as conservative as possible, but I’m not okay with throwing House Leadership to Dems & Never Trumpers,” Trump Jr. tweeted.

“Being fine with Hakeem Jeffries becoming Speaker simply out of spite for McCarthy isn’t what any Republican voted for in November. Disaster.”

Trump Jr. also wrote about the GOP dissent regarding McCarthy on his father’s Truth Social platform.

“Hearing that we could end up with a never-Trumper or Dem as Speaker. McCarthy committed to a Select Committee on the politicization of Federal Law Enforcement & real investigations into the Biden Admin & the border. But we won’t get any of that with a Never-Trumper as Speaker!”

Despite Trump’s statements, McCarthy fell short on the first and second ballots to become speaker of the House on Tuesday. Nineteen Republicans voted against him in each roll-call vote.

Prior to the vote, McCarthy was supported by Republican Representative Marjorie Taylor Greene of Georgia, who is viewed by many as more conservative than McCarthy. After the California congressman failed to sway more Republicans in a meeting before Tuesday’s vote, Greene spoke out against those opposing McCarthy.

While venting her frustrations with reporters after the meeting, Greene mentioned Gaetz and Boebert by name.

She criticized Gaetz for blocking McCarthy after recently calling a compromise on the GOP rules package “exquisite.” Greene also denounced Boebert for opposing McCarthy after taking money from him for her midterms reelection campaign.

Meanwhile, the entire Democratic caucus voted against McCarthy by supporting Jeffries, who received 212 votes to McCarthy’s 203 in both ballots. Neither representative collected the 218 noted needed to be elected speaker.

In the second ballot, Jim Jordan of Ohio received all 19 non-McCarthy votes after nominating McCarthy and urging his party to vote for the Californian.

One thought on “Donald Trump Jr. Turns on MAGA “Disaster””