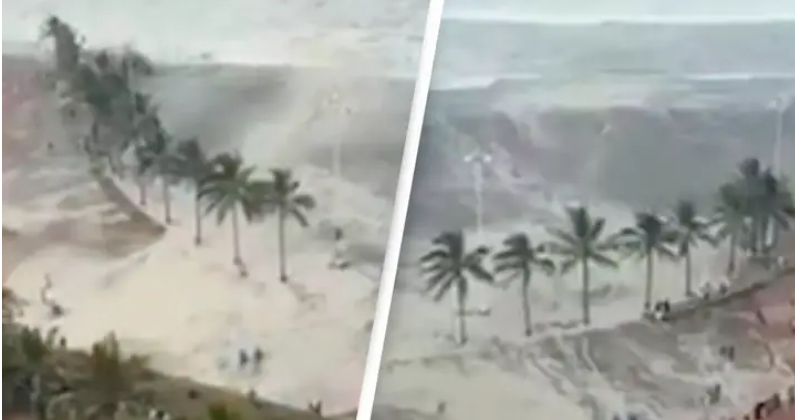 The coastal city of Durban in South Africa was struck by a ‘freak wave’ which killed three people and hospitalized another 17 after it struck a packed beach.

Njabulo Dlungele, a spokesperson for the emergency medical services, said three people had been dragged out to sea by the freakish wave and drowned in rip currents.

He added that the wave caused further injuries as it slammed a group of swimmers against a pier when it struck the beach at around 5pm local time on Sunday (18 December), with a teenager among the three who were killed.

Rescue efforts involving 35 lifeguards dealt with more than 100 people who had been impacted by the freak wave, with at least 17 being taken to hospital in serious conditions.

Images from the site of the sudden disaster showed emergency services carrying people away on stretchers to receive treatment.

Footage tourists had taken of the wave hitting the beach showed people running away from the huge wave to avoid being hit and swept away.

It’s the busy tourist season at the moment in South Africa as it’s currently summer there, with large numbers of people flocking to the beaches to enjoy warm weather.

According to AP, the end of the coronavirus pandemic in many countries has resulted in an influx of tourism as people seek to make up for lost time and are ‘eager’ to return to the beaches.

Durban is a very busy place during the high tourist season as South Africans and people from all over the world enjoy visiting the coastal city during summertime in the southern hemisphere.

Speaking to the Sunday Times in South Africa, KwaZulu-Natal premier Nomusa Dube-Ncube welcomed a full investigation into the disaster and deaths which resulted from the wave.

They said: “The details of the incidents are still sketchy. However, it is believed that a freak wave put many people into distress while swimming and they tragically drowned. Seventeen others are reported injured.

“The premier has called for a full investigation into this terrible tragedy. This will include fact-finding on all safety measures.”

“Dube-Ncube has directed that support be prioritised to all affected families in this time of tragedy and grief for our province.”

“The premier has called for a full investigation into this terrible tragedy. This will include fact-finding on all safety measures.”

“Dube-Ncube has directed that support be prioritised to all affected families in this time of tragedy and grief for our province.”

Tourists have been reminded of the dangers of swimming in the sea and warned to only swim in areas marked out as safe by officials.