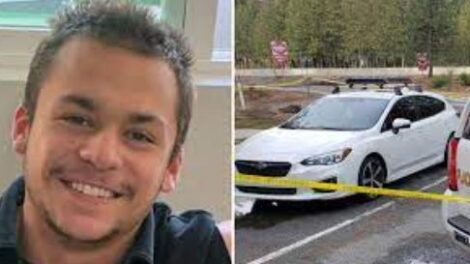 A teenager was found dead in a remote area after visiting a California rest stop to work on a school science project.

Dante de la Torre, a 16-year-old Colfax High School student, was reported missing on Wednesday after he went to a wooded area along Interstate 80 and did not return, according to the Placer County Sheriff’s Office.

“Dante went to the Gold Run rest stop area for a school project around 12:30 p.m. yesterday afternoon,” police wrote in a statement on Thursday. “He has had no contact with friends or family since then.”

A childhood friend told CBS station KOVR that “he had to get dirt for a science project.”

According to police, it was believed that the teen had packed “water bottles, a hand towel or small shovel, and snow boots.” Dante de la Torre. Placer County Sheriff’s Office

After hearing that there were “multiple civilian search parties” interested in joining the search, police issued a second statement, urging the public to leave the operation to them.

“While we appreciate the offer to help, this will only impede our search,” the sheriff’s office wrote at the time.

“We currently have over three-dozen specially trained searchers and K9s who specialize in scent detection looking for Dante,” they wrote when the effort was ongoing. “If the public begins searching the area, there is a likelihood our K9s will lose Dante’s scent, impacting our search for him. We thank our community for their understanding.”

Hours later, authorities said the teen had been found dead.

“It is with a heavy heart we are updating the community that 16-year-old Dante de la Torre was found deceased this afternoon in a remote wooded area near the Gold Run Rest Stop,” they wrote in a statement.

Although a cause of death has not been released, police said there was no indication of foul play, but that his body will be examined by a coroner.

“We offer our condolences to the de la Torre family and Dante’s friends during this unbelievably tragic time,” they added.

A spokesperson for the sheriff’s office described the remote area where the teen was found to CBS station KOVR.

On Wednesday night, temperatures there were near freezing, according to The Sacramento Bee.

On Thursday, the Placer Union High School District shared they were “heartbroken” to learn of the 11th grade student’s death.

“Such tragedies, especially when they involve young people, are very difficult to process. Chaplains and additional District Counseling staff will be on the Colfax High School campus to provide support to our students and staff as they deal with this devastating news,” school officials wrote in a message obtained by PEOPLE.

They added, “Please join us in keeping Dante’s family, friends and the Colfax community in your thoughts during this difficult time.”