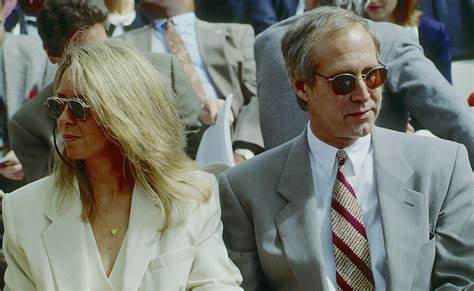 While his relationships with co-stars are infamous, his marriage is nearly the total opposite.

Chevy Chase has made millions of people laugh over the course of his extraordinary career. There’s no doubt that the actor has established himself as one of the great comedic minds of our time. However, the actor stays a bit more reserved when it comes to his family life.

Who Is Jayni Chase?

Jayni Chase was born in Los Angeles, California on August 24, 1957. Much like her husband, she was destined for a career in the entertainment industry. According to her IMDB profile, she worked as a production coordinator on the 1981 film Under the Rainbow, and she also has a credit for location management on her husband’s film National Lampoon’s Vacation.

However, it seems like her true passion is environmentalism. According to her LinkedIn profile, Jayni founded the Center for Environmental Education in 1987. She’s also served as the chair of the Board of Directors for Friends of the Earth since 2020. She’s even written a couple of articles about environmental issues for the Huffington Post.

Jayni met Chevy—whose real name is Cornelius Crane Chase—while they were both working on the film Under the Rainbow. According to an interview Chase gave to PBS (via Rare), Jayni wasn’t initially interested in Chevy.

“I was walking behind her one day and I said, ‘Is that your real color hair?’ and she couldn’t care less about me,” Chevy noted. Jayni added that she hadn’t been interested in having a relationship at the time, but Chevy wore her down.

Chevy and Jayni tied the knot in 1982 in the Pacific Palisades. Jayni became stepmother to Chevy’s son Bryan from a previous marriage. Later that year, Jayni and Chevy welcomed their daughter Cydney. Two years later, they expanded their family when their daughter Caley was born.

Finally, in 1988, Chevy and Jayni welcomed their youngest daughter, Emily. Per the Washington Post, Chevy and Jayni moved their family to the small town of Bedford, New York in the mid-1990s.

Jayni Has Stood Beside Chevy Despite His Bad Press

It’s no secret that Chevy Chase hasn’t had the easiest go of it in the press over the past few years. There have been accusations of racism and bullying. Even in his own interviews, Chevy often struggles to gauge the appropriateness of his jokes. However, Jayni’s support for her husband has never wavered. In 2018, Jayni actually opened up to the Washington Post about her husband’s public missteps.

According to Jayni, the roots of Chevy’s sometimes abrasive personality are in his upbringing. Chevy was often physically and verbally abused by his mother in his youth, something Jayni insists still affects him today.

“Chevy is an abused kid,” Jayni remarked. “One of the things that most of us have is, we know that our moms loved us, and some of us are lucky enough to be able to say that our fathers also loved us … there’s layers of lucky and grateful, and things that give you a good start in life, and a foundation and self-confidence, and give you a capacity to live without fear. And Chevy doesn’t have those things.”

Their marriage hasn’t been without its struggles, though. According to the Washington Post, after Chevy’s relationship with Community creator Dan Harmon became strained and Chase was blasted in the press by his colleagues, he fell on hard times. Chevy apparently began drinking heavily, and his health suffered for it. Jayni stood by Chevy as he struggled with alcoholism.

She told the Washington Post that she wrote her husband a note that read, “I do not want to divorce you, but I can’t watch you hurt yourself anymore.” Not long after, Chevy gave up drinking cold turkey and hasn’t had a drop since.

Chevy Credits Jayni with Helping Him Get Sober

When Chevy and Jayni met, the comedian admitted he was in a bad place. His second marriage had recently gone up in flames, and Chevy was drowning his sorrows with drugs and alcohol. However, as soon as Jayni entered the picture, things changed for the Three Amigos actor.

“When I met Jayni, what was I, a Bowery bum?” Chevy told People in 1983. “She got me right out of the doldrums I’d been in for three years.” Under Jayni’s “very straight” influence, Chevy insisted, “there is no smoking of pot, no drugs, no drinking. It’s a very clean life.”

In that same interview, Chevy also revealed that he tends to stay away from romantic roles. As he explained, he doesn’t want his daughters to see him kissing anyone other than their mother.

It’s clear that Jayni and Chevy are a couple that both support each other and encourage the other to be better every day. Their long-lasting partnership is becoming an increasingly rare breed, and we hope they have many, many more blissful years to come.