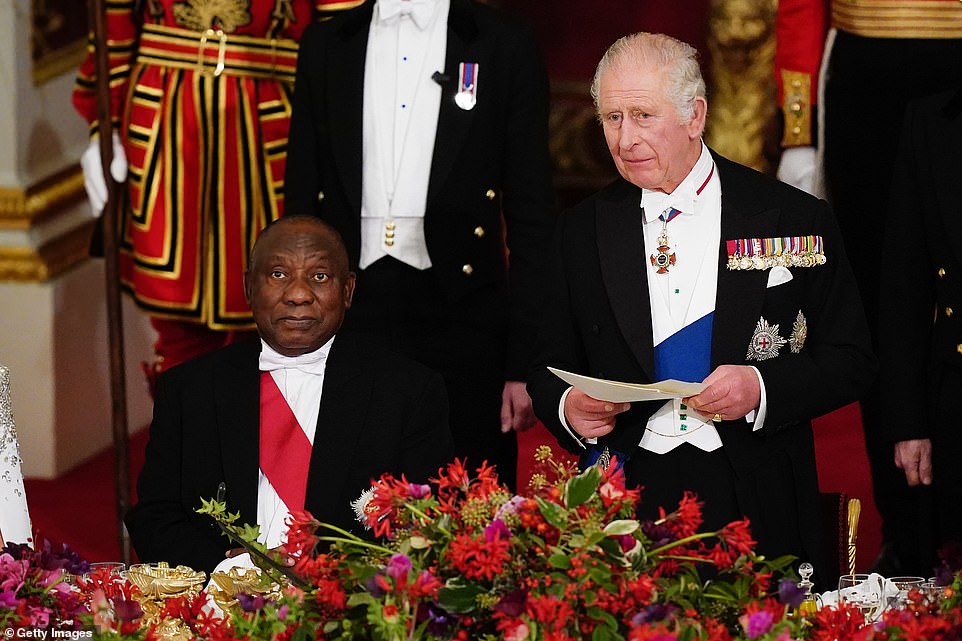 In remarks made before South African president Cyril Ramaphosa, the new monarch said aspects of the relationship between the two countries ‘provoked profound sorrow’, but called for future cooperation.

It comes as His Majesty continues his push to keep the Commonwealth together, amid growing calls in some of its member nations to ditch the monarchy for good.

Last year the then-prince denounced the ‘appalling atrocity of slavery, which forever stains our history’ in a speech given in Barbados as it broke ties from the Royal Family and became a republic.

And earlier this year he expressed his sadness about the UK’s role in the slave trade, telling Commonwealth leaders: ‘I cannot describe the depths of my personal sorrow at the suffering of so many as I continue to deepen my own understanding of slavery’s enduring impact.’

In his latest remarks, made last night at Buckingham Palace, the King said he remained committed to ensuring Britain acknowledges ‘the wrongs which have shaped our past’.

He made the speech at a state banquet which had been held to mark the two-day state visit by President Ramaphosa and the South African delegation.

Members of the South African contingent were met by the likes of the King and Queen Consort, as well as the Prince and Princess of Wales, who charmed those in attendance.

A total of 163 people, including senior politicians from both countries were present for an opulent banquet as the Palace pulled out all the stops in the first state visit of the King’s reign.

In a speech before the banquet began, the King addressed head on the issue of Britain’s colonial history with South Africa, aspects of which ‘provoked profound sorrow’.

He said: ‘While there are elements of that history which provoke profound sorrow, it is essential that we seek to understand them. As I said to Commonwealth leaders earlier this year, we must acknowledge the wrongs which have shaped our past if we are to unlock the power of our common future.’

President Ramaphosa, who was sat beside him at the head table, gently nodded at his words.

The monarch also told his guests that ‘South Africa, like the Commonwealth, has always been a part of my life’.

The King told the room: ‘The late Queen had the great pleasure of hosting Presidents Mandela, Mbeki and Zuma for State Visits to the United Kingdom, at all of which I was present.

‘On each of those occasions, she expressed her admiration for your country and its people, its vibrancy, natural beauty and diversity.

‘And she always talked warmly of her return to your country in 1995, as the guest of President Mandela, after the momentous events – driven from within South Africa and supported by so many around the world, including here in the United Kingdom – that brought democracy to your country.

He left the audience laughing when he remarked: ‘During one of my own visits to South Africa, in 1997, President Mandela told me that he had conferred on my mother a special name – Motlalepula, meaning “to come with rain”.

‘I have been reassured that this was a mark of the particular affection President Mandela felt for the Queen… rather than a remark on the British habit of taking our weather with us!’

Earlier he had opened with the word ‘welcome’ in several of the main languages of South Africa which left the President delightedly saying ‘wow’ openly.

The king concluded with a rousing: ‘Nkosi Sikelel’ iAfrika’.

The speech seems to suggest a continuation of the conciliatory the King struck while he was heir to the throne, as anger bubbles away at the UK’s role in the slave trade.

In 2021 the Caribbean nation of Barbados became a republic after a referendum on removing the Queen as head of state.

In a speech given when it became a republic in November 2021, the then-Prince Charles said: ‘From the darkest days of our past, and the appalling atrocity of slavery, which forever stains our history, the people of this island forged their path with extraordinary fortitude.’

In recent tours of the Caribbean members of the Royal Family have tried to strike a similar tone in a bid to stop burgeoning republican movements in the likes of Jamaica, Grenada and Belize.

Last night the Princess of Wales played a key role in smoothing any frayed edges, with the King’s daughter-in-law seen beaming as she entertained President Ramaphosa at the banquet.

Kate Middleton wowed in a stunning white dress and donned the sparkling Lover’s Knot Tiara – an item that had been a favourite of Diana – as the Royal Family welcomed a delegation from the African nation.

There were smiles all round as the King and Camilla, Queen Consort, greeted Mr Ramaphosa, at the palace yesterday evening ahead of an opulent banquet which was also attended by the Earl and Countess of Wessex, and senior politicians from both countries.

Mr Ramaphosa, whose visit was in the planning before the Queen Elizabeth II’s death, was greeted by more than 1,000 soldiers, 230 horses, seven military bands and two state coaches on Tuesday.

Later he was an honoured guest at a State Banquet held by the King, Queen Consort and other members of the Royal Family at Buckingham Palace.

As members of the Royal Family arrived at the Palace last night, all eyes were drawn to the Princess of Wales, who stunned onlookers with her dazzling outfit topped off with Queen Mary’s Lover’s Knot Tiara.

The sparkling number once belonged to Princess Diana and it is now perhaps Kate’s most favoured piece of royal jewellery.

The tiara was made by Royal jeweller Garrard in 1914 to Queen Mary’s personal design, from pearls and diamonds already in her family’s possession.

It was a copy of one owned by her grandmother, Princess Augusta of Hesse, who married the first Duke of Cambridge, seventh son of King George III, in 1818.

In her will, Queen Mary left the tiara to the Queen who wore it frequently, including at an evening event in 1955.

In 1981 she gave it as a wedding present to Prince William’s mother, Diana, who wore it for the first time at the state opening of parliament that November. Diana also wore the tiara in 1985 on an official visit to Washington with Prince Charles.

And since her death the glistening headpiece has been worn by the Princess of Wales; in October 2018, Kate wore the tiara to a state banquet along with a silvery blue taffeta gown by one of her go-to designers, Sarah Burton for Alexander McQueen.

She teamed it with Princess Diana’s Collingwood pearl earrings and Queen Alexandra of Denmark’s wedding gift necklace, which was a favourite of the Queen Mother’s.

The Queen Mother wore the diamond and pearl sparkler on her 85th birthday in 1985 and during a formal appearance in 1964.

Camilla, the Queen Consort, was spotted wearing the George VI Sapphire Tiara, which used to belong to the late Queen Elizabeth II.

Female members of the Firm were seen sporting the Royal Family Order, a brooch showing a portrait of the late monarch on a yellow ribbon which is worn at all state banquets.