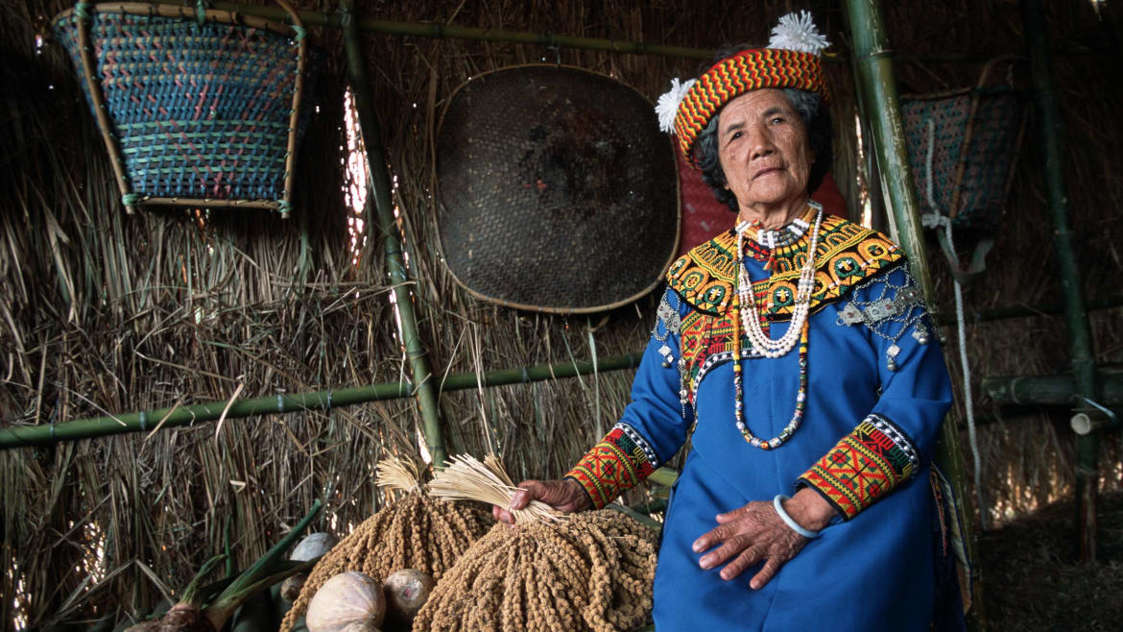 In July 1997, I was fortunate to spend a few days among the Paiwan, an Aboriginal people in the south central highlands of Taiwan. I was in the country for typically academic reasons, attending a conference at a Taipei research center, but had been invited by a couple of anthropology students who were undertaking fieldwork in the mountainous interior to visit the village in which they were staying.

It was an exhilarating, bewildering, and absurdly short trip: I took a crammed local flight from Taipei, arriving late at night in a dimly lit but frenetically busy local airport.

After a long drive in the dark—I had no notion of our route or direction—we entered a village. I was aware of a big church and tin-roofed houses interspersed with gardens. We were welcomed by an elderly female shaman who kept sacred venomous snakes in an alarmingly insecure cage in the middle of her living room. Well into the night, we drank beer and watched her videos of local rituals; as well as being the principal local healer, she was a kind of auto-anthropologist.

Early the following morning, in front of an imposing wooden god bearing a double-headed snake, we drank millet wine with the ancestors to mark a harvest ceremony. That evening, I was back at the hectic airport. Uncannily, the shaman and others I met around the village bore wrist and arm tattoos that were strikingly similar to those I had seen on the bodies of many Polynesians during trips to Samoa, Tahiti, the Marquesas, Hawai‘i, and elsewhere. Yet Tahiti was almost seven thousand miles away.

On returning to Taipei, I visited a small museum dedicated to the Indigenous cultures of the island. (It stands, as if in humble protest, across the road from the National Palace Museum, an awesome, Louvre-like complex dedicated to traditional art from China.) Here were canoes, architectural forms, figure sculptures, and other works and artifacts that again bore motifs remarkably close to those featured on boats, houses, and ceremonial objects in various parts of the Pacific Islands.

Having been a student of Pacific archaeology, I had been taught that Oceanic cultures could be traced back to the island known historically as Formosa, today as Taiwan. Yet the links were ancient; I had no expectation that I would see them exemplified on the bodies of living people or on recently made artifacts. But my excitement—sparked by cultural affinities between peoples separated by successive migrations over millennia and, in the present, by vast distances—made me a little uncomfortable. In making connections, I felt I was indulging in the kinds of comparisons enthusiastically but arbitrarily made by nineteenth-century philologists. I worried that I had somehow ventured into Fornander-land, the Pacific counterpart to Casaubon’s realm of daft speculation.

Captain James Cook and Joseph Banks had an inkling of the story behind these links. They reasoned, having compared lists of words from Polynesia, island Southeast Asia, and Madagascar, that the peoples of the Pacific had originated in Asia. From the mid-twentieth century on, this basic inference—essentially a hunch that this was the most likely direction of travel—would be substantiated, enlarged, and made nuanced on the basis of several generations of scholars’ research across archaeology, linguistics, and genetics. The upshot has been a rich and textured sense of extraordinary chapters in human history, as well as many questions that remain unanswered.

In 1952, the ethnographer turned archaeologist Edward Gifford led a six-month expedition to New Caledonia, which built on work he had undertaken a few years earlier in Fiji, aiming to address the question of Polynesian origins through a search for sites on larger islands in the southwestern Pacific. He was accompanied by a younger archaeologist, Richard Shutler, and both men’s wives. Among the areas they investigated was the Foué Peninsula, on the west coast of the island known as the Grande Terre (distinguishing the main landmass from the Loyalties and other smaller islands).

They were following up on early twentieth-century reports of pottery finds, and they dedicated just five days to a coastal site that yielded well-preserved ceramics. These ceramics became famous for their distinctive dentate-stamped designs, that is, patterns pricked into the clay with some hard and sharp instrument such as a fine comb of shell or bamboo. The pottery shards resembled pieces that Gifford had previously found in Fiji and others had found some decades earlier in Tonga. Unlike their predecessors, Gifford and Shutler were able to date samples from the pottery-bearing layers, using the then-novel technique of carbon-14 dating.

The analysis revealed that the broken pots were around 2,500 years old. After decades of almost vapid speculation, the human settlement of these archipelagoes could be seen in terms that were precise and historical. Oceania would be as susceptible as the Mediterranean to scholarly research, which might identify populations, their social and economic systems, their movements and interactions, and the patterns of cultural influence over time.

Jack Golson, who later led an important investigation in the New Guinea Highlands, had moved from Cambridge to the University of Auckland in the mid-1950s to establish a program of archaeological research in the south Pacific. He soon followed up the work of Gifford and Shutler, excavating sites on the Isle of Pines, off the southern tip of the Grande Terre of New Caledonia. He corroborated their identification of a ceramic tradition that would be named Lapita, after the site from which Gifford and Shutler had obtained their dates.

But while these and succeeding finds were important, what was decisive was Golson’s imaginative thesis: that the ceramic finds from across the region, extending all the way from the formidable Melanesian territory of the Grande Terre through the archipelagoes of Fiji into western Polynesia, reflected what he called “a community of culture”— a common tradition and, by implication, a people or set of related peoples.

From one perspective, the observation that artifacts were stylistically related, and the inference that their affinities reflected wider connections among the peoples of a region, might seem unremarkable. But the suggestion that a “community” of related peoples occupied these islands and archipelagoes flew in the face of the harsh juxtaposition between Melanesia and Polynesia that had been fundamental to visions of Oceania since d’Urville’s mapping of Pacific populations over a century earlier.

His Melanesia-Polynesia division had been grounded in physical difference, above all in skin color; it was explicitly hierarchical, indeed, essentially racist. That division had moreover underpinned Te Rangihiroa’s effort to celebrate his Polynesian “Vikings of the sunrise” at the expense of Melanesians, whom the Polynesians had bypassed, not only geographically but through their swift ascent toward civilization. To propose that the Melanesians and Polynesians were ancestrally of one dispersed community was to turn deep-seated classifications and stereotypes on their heads.