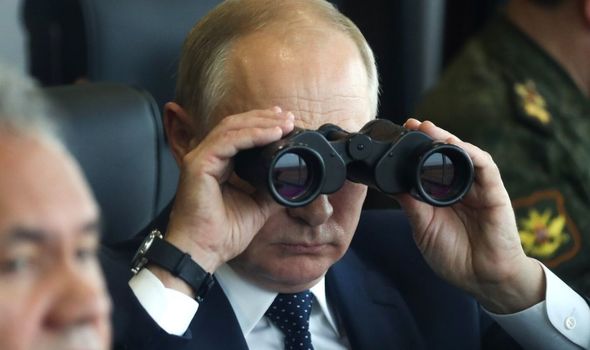 The President of Russia, 68, oversaw the Zapad war games taking place in Kaliningrad, located between Poland and Lithuania, with more than 200 items of military equipment. The military drills also included the world’s largest hovercraft as thousands of Russian troops participated in the military drills.

Footage from the exercise showed the Zubr-class LCAC, the world’s largest hovercraft, participating in Monday’s drills.

The Zapad joint exercises with Belarus take place every four years across western Russia and Belarus.

Russia has claimed that this year’s war games involve 200,000 troops, but military experts estimate the number to be much lower.

In an article for the website War on the Rocks last week, Michael Kofman, director of the Russia Studies Program at the Center for Naval Analyses, wrote it is Moscow’s intention to emphasise the number of troops participating.

The war games are intended to test the country’s capabilities to fight a major war with Nato on Russia’s northern border.

“It is in Minsk’s interest to invite a much larger Russian footprint as a show of support for the regime,” Mr Kofman continued.

“Judging from early deployments and training range selection, a more sizeable Russian contingent will be in Belarus and Russian troops will be much closer to the borders with Poland than they were during previous Zapad exercises.”

The exercises are due to end on September 16, but Moscow has announced that the Russian troops will not return to their military bases until mid-October.

The defense minister has not given an explanation for the delayed return.