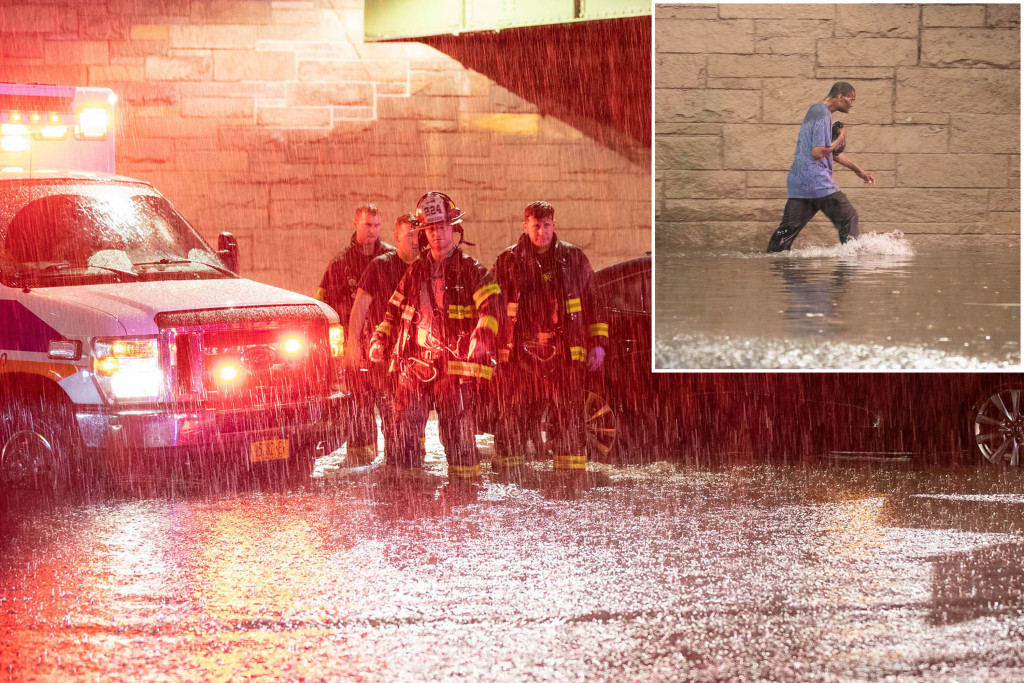 Tropical Depression Henri was inching across the Northeast on Monday, a record-setting storm that knocked out power to more than 100,000 homes and businesses and drenched parts of New York City with more than 8 inches of rain.

Henri was nearly stationary early Monday after making landfall Sunday afternoon in Rhode Island as a tropical storm packing 60-mph winds. The National Hurricane Center said maximum sustained winds were down to about 30 mph with higher gusts, and there was little change in strength forecast for the next two days.

The storm, centered about 60 miles north of New York City, was expected to begin sliding east later in the day. Flood watches were in effect across eastern Pennsylvania, southeast New York, New Jersey, Long Island and portions of New England.

As the storm moves across southern New England on Monday, more flooding from the heavy rains and an “isolated brief tornado” were possible, the National Weather Service office in Boston said.

Some areas of New Jersey also recorded more than 8 inches of rain, and floodwaters ran like rivers down streets. The central New Jersey town of Cranbury was blasted with almost 9 inches of rain. In nearby Helmetta, 200 residents fled for the homes of family and friends on higher ground after floodwaters inundated their own homes Sunday.

“It came so quick – in the blink of an eye,” Helmetta Mayor Christopher Slavicek said. “Now there’s clean up. So this is far from over.”

“It’s a lot of street flooding,” New Jersey Gov. Phil Murphy said during an interview with News 12. “It’s the places that overwhelmingly would not surprise folks. So we’re concerned, and we’ll do everything we can, working with municipalities and counties and our own team to stay out of this as best we can.”

Newark Public Safety Director Brian O’Hara said 86 people were rescued by police and firefighters across the city because of “significant flooding” from the hurricane, according to a news release posted to the social media website Nextdoor.

“I urged them to take advantage of the assistance FEMA can offer in advance,” Biden said Sunday as the storm rolled in. “I’m committed to do everything we can to support their communities through the storm and afterwards.”

The storm made landfall Sunday afternoon near Waverly, Rhode Island. More than 100,000 homes and businesses lost power in the state, but power had been restored to more than half of them by early Monday.

Rhode Island’s Block Island, where the storm crossed before reaching the mainland, escaped largely unscathed: Only one boat came off its mooring, the few localized power outages were soon repaired, and restaurants and shops were back in business by the afternoon.

“There’s thousands of dragonflies around,” texted Andre Boudreau, first warden of the New Shoreham Town Council. “Other than that all is calm.”

In Newport, a few trees and power lines were knocked down. At a temporary shelter, only five people came through from Saturday to Sunday, shelter associated Mike Blanchet said. “It’s been pretty quiet.”

There was relief on Massachusetts’s Cape Cod, which had been preparing for a direct hit and the worst of the storm, after its path shifted. “I think we dodged a bullet,” Harwich harbormaster John Rendon said.

In Connecticut, about 250 residents from four nursing homes had to be relocated. Linda Orlomoski, of Canterbury, Connecticut, was among several thousand people in the state without power late Sunday.

“It’s supposed to get nasty hot and humid again on Tuesday,” she said. “If we still have no power by then, that will be miserable.”

This article originally appeared on USA TODAY: Henri stalls over Northeast, drenching region and flooding communities ‘in the blink of an eye’