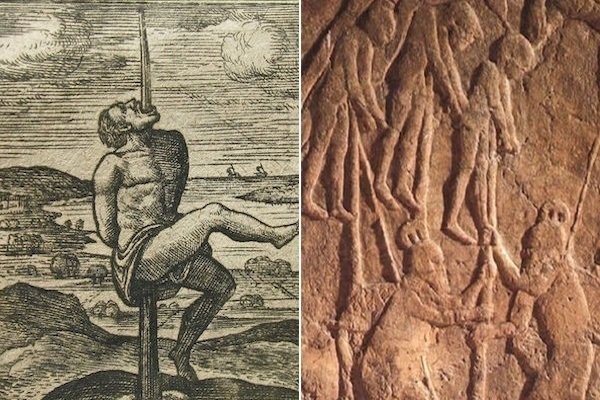 Impalement is a simple, brutally effective technique: With just a sharpened stake and a captive’s soft, fleshy body, you’ve got the recipe for a grotesque, agonizing, and protracted death.

Notorious historical figure Vlad the Impaler, of course, is said to have favored this method of dispatching those who displeased him. But according to Britannica, death by impalement dates back much further than the man who is said to have been so savage that he inspired Bram Stoker’s “Dracula.”

History Collection states that there are two distinct, dreadful flavors of impalement: transverse impalement and longitude impalement. In the first, the victim is pierced horizontally through the torso, and in the latter, they are pierced vertically, from bottom to top (as it were).

Other grim variants, such as launching — hoisting and dropping victims onto a bed of spikes — were also employed. The first recorded case of impalement as punishment appeared in Ancient Mesopotamia. The Hammurabi code of 1772 B.C. states that women who killed their husbands to pursue other men would be impaled, as could those who engaged in adultery.

Impalement was also popular in the ancient world as a means of frightening foes into submission. Lessons from History states that the Assyrian empire ruled through military might and shows of force, which would include huge group killings and impalement. Vlad the Impaler seemed to take a leaf from this gruesome book with his resistance-is-futile strategy.

In the 15th century, Vlad III, Prince of Wallachia, regained the lands that his father had lost (per Live Science), only for them to be subject to Ottoman invasion. In one notorious story, according to Florin Curta (a medieval historian at the University of Florida), Mehmet II reached Târgoviște, Wallachia’s capital. There, “he found the bodies of the Ottoman prisoners of war that Vlad had taken — all impaled.”

Vlad, sadly, was far from the only impaler in history. From ancient times to the modern day, the practice’s effectiveness on both victims and far beyond has been utilized. In “A Visit to Greece in 1823 and 1824,” George Waddington wrote of the dark days of the 1821 Greek War of Independence and the revolution.

According to him, forces of the Ottoman Empire engaged in “frequent excursions into the mountains and villages, which they called Greek-hunts.” After one such “excursion,” the Ottoman commanders “ordered some of those wretches to be impaled, for no other existing reason than to oblige the monstrous caprice of [those] who had seized them.”

A forgotten relic of ancient torture? Sadly not.