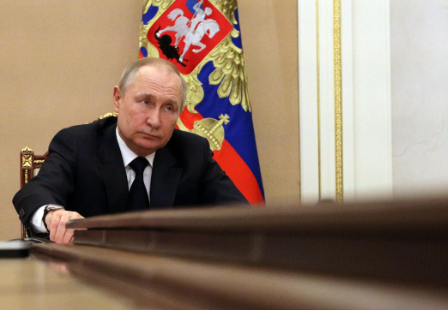 It is being reported that Vladimir Putin, the 70-year-old Russian leader, is preparing to step down from his position as the leader of Russia due to his rapidly deteriorating health.

Intelligence officials have revealed that Putin is planning to “disappear” from his leadership position within the Kremlin because there is “clearly something wrong” with his health.

This sudden development comes at a time when Russia’s ongoing war against Ukraine is “going from bad to worse,” and Putin’s political career is “hanging in the balance” as his forces struggle to take control of the neighboring nation, one year after first invading in February 2022.

The rumors about Putin’s health have been circulating for some time, with many experts and intelligence officials expressing concern about his ability to lead the country.

Sir Richard Dearlove, the former head of MI6, recently stated that “he’s probably faced with another call-up. That clearly is deeply unpopular in Russia.”

Furthermore, there was a recent back-and-forth between Ukrainian President Volodymyr Zelenskyy and Kremlin spokesman Dmitry Peskov regarding whether Putin is still alive.

This recent turn of events has raised many questions about the future of Russia and the stability of the country. It remains to be seen how Putin’s departure from leadership will affect the ongoing war against Ukraine, and whether or not his health issues will have a significant impact on his ability to lead the country.