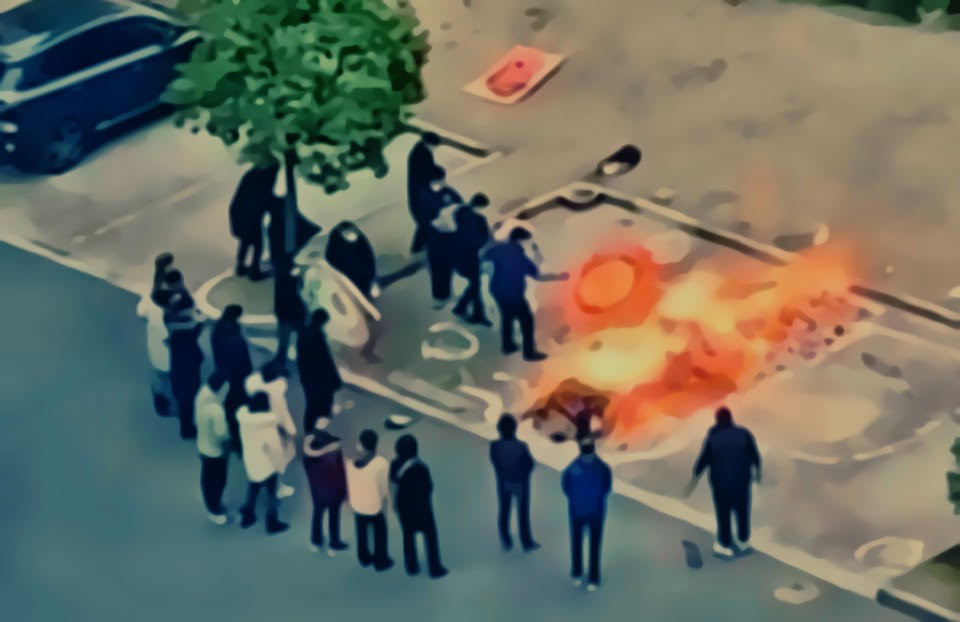 Families in China appear to have started burning the bodies of their loved ones in the streets amid an explosion of Covid-19 infections.

Beijing axed its ‘zero-Covid’ policy last month after three years of stringent curbs, causing cases to soar in the country.

Funeral homes and hospitals say they have been overwhelmed as international health experts predict 2.1 million Covid deaths in the coming months. Despite this, China claims only around 5,000 people have died from the virus since the policy U-turn.

Funeral homes have increased the cost of cremations amid the surge in demand – which has seemingly led some families to take matters into their own hands.

In one clip, which appears to be in a rural area, a wooden casket is seen burning on a small pyre beside a pathway.

Another video, which is said to have been filmed in Shanghai, shows a group of people around a makeshift pyre in a car park.

Two more videos from the city show families laying bodies out on bed sheets before drawing a chalk outline around the pyre and setting it alight.

Covid cases have surged in Shanghai with 70 per cent of the city’s 25 million population estimated to have been infected with the virus, according to a doctor at one of the city’s hospitals.

A screenshot posted to Chinese social media platform Weibo showed a message from one man telling his neighbours that his father had died. However he said he couldn’t afford the cremation service and so would ‘find an open space’ to burn his father’s remains.

Another Chinese user wrote on Weibo that citizens ‘couldn’t afford to live under lockdown’ and now ‘can’t afford to die’ due to rising funeral costs, Bloomberg reported.

The scenes are reminiscent of India in 2021, when the Delta variant ran rampant through the country and killed tens of thousands of people.

As crematoriums were overwhelmed, citizens were forced to burn their dead on makeshift funeral pyres. At the time, Beijing’s media mocked countries forced to incinerate their corpses in public spaces such as town squares.

London-based health researcher Airfinity believes more than 9,000 people are dying from the disease each day in China. This number could rise to 25,000 as people start to travel around the country for Lunar New Year celebrations.

Airfinity expects China’s cases to reach their first peak on January 13 with 3.7 million daily infections, and warned deaths in the coming months could hit 2.1 million.

Chinese officials claim only 5,250 deaths have been recorded throughout the entire pandemic.

‘That is totally ridiculous,’ a 66-year-old Beijing resident who only gave his last name Zhang said. ‘Four of my close relatives died. That’s only from one family. I hope the government will be honest with the people and the rest of the world about what’s really happened here.’

Global health officials have treated China’s figures with scepticism as they try to prevent the virus spreading.

But the Communist Party’s official newspaper dismissed the criticism,  saying that China will ‘surely win the final victory’ over the virus.

Several countries have imposed restrictions on Chinese passengers, requiring proof of a negative test before travel.

European Union health officials are due to meet to discuss a coordinated response after countries including Japan, Australia and the US introduced curbs.

Beijing has hit back against the move, saying the rules were unreasonable and lacked a scientific basis.

China will also lift quarantine rules for inbound travellers from January 8 but will still demand passengers get tested before they begin their journeys.

World Health Organisation officials met Chinese scientists on Tuesday amid concern over the accuracy of China’s data on the outbreak.

The WHO will release information about the talks later, its spokesperson said.

Last month, Reuters reported that the WHO had not received data from China on new Covid hospital admissions since Beijing’s policy shift, prompting some health experts to question whether it might be concealing the extent of its outbreak.

British-based health data firm Airfinity has said about 9,000 people in China are probably dying each day from Covid.

There were chaotic scenes at Shanghai’s Zhongshan hospital where patients – many of them elderly – jostled for space on Tuesday. Photos showed makeshift beds lining the hallways where people used oxygen ventilators and got intravenous drips.

With Covid disruptions slowing China’s $17trillion economy to its lowest growth in nearly half a century, investors are now hoping policymakers will intervene to counter the slide.

China’s yuan hovered at a four-month high against the dollar on Wednesday, after its finance minister pledged to step up fiscal expansion this year, days after the central bank said it would implement more policy support for the economy.

Despite the restrictions by some countries on visitors from China, interest in outbound travel from the world’s most populous country is cranking up, state media has claimed.

Before the pandemic, global spending by Chinese tourists exceeded $250billion a year, but that was halted when Beijing closed the country’s borders.

The number of flights to and from China is still a fraction of pre-Covid levels. The government has said it will increase flights and make it easier for people to travel.

Thailand expects at least five million Chinese arrivals this year, its tourism authority said. More than 11 million Chinese tourists visited Thailand in 2019, nearly a third of its total visitors. But there are already signs that an increase in travel from China could pose problems abroad.

South Korea, which began testing travellers from China on Monday, said more than a fifth of the test results were positive.

Authorities there were searching for one Chinese national who tested positive but went missing while awaiting quarantine. The person, who was not identified, could face up to a year in prison or fines of 10 million won.

It was reported yesterday that Chinese health officials, in a rare admission in the authoritarian country, had said China was facing a ‘huge’ number of deaths.

Jiao Yahui, a National Health Commission official, told state broadcaster China Central Television: ‘We have a huge base, so what people feel is that the severe cases, the critical cases or the fatalities are increasing.

‘As far as this wave is concerned, what people have felt is the absolute number, not the low percentage [of deaths to total infections]. Relative to the rest of the world, the infection peaks we are faced with across the country are not unusual.’

Tong Zhaohui, a vice-president of Chaoyang Hospital in Beijing, agreed that the number was large but said the relative percentage of deaths may still be low. ‘Think how many people around you have been infected but how many have developed critical cases or pneumonia. I think everyone has the idea,’ he said.

Chen Erzhen, vice president at Ruijin Hospital and a member of Shanghai’s Covid expert advisory panel, estimated that the majority of the city’s 25million people may have been infected.

On Monday, China’s president Xi Jinping finally admitted the mistakes of his draconian zero-Covid policy which failed to contain the virus and sparked the country’s first widespread mass protests in decades.

The premier acknowledged ‘unprecedented difficulties and challenges’ in his New Year’s Eve address to the nation and said it was ‘only natural’ that his harsh lockdown measures were met with resistance.

Xi dropped the zero-Covid measures on December 7 but his new strategy of living with the virus has caused infections to skyrocket, with infections currently peaking in Beijing. In the first 20 days of December, the government’s top health authority estimates a staggering 248 million people – equivalent to 18 per cent of the population – contracted the virus.

In his address, he said China is now in a new phase of Covid control which is ‘optimised’ to protect lives and the economy.

He added: ‘Since Covid-19 struck, we have put the people first and put life first all along. With extraordinary efforts, we have prevailed over unprecedented difficulties and challenges, and it has not been an easy journey for anyone. We have now entered a new phase of Covid response where tough challenges remain.

‘What matters is that we build consensus through communication and consultation. ‘Let’s make an extra effort to pull through as perseverance and solidarity mean victory.’

The speech was a major shift from the celebratory tone in October when he secured a third term in power at his party congress.