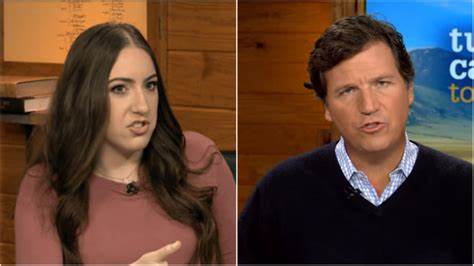 Right-wing influencer Chaya Raichik—the mind behind the homophobic conservative social media account “Libs of TikTok”—sparked outrage after telling Fox News personality Tucker Carlson that the LGBTQ+ community is a “cult” that “pulls people in so strongly” as part of its efforts to “groom” and “recruit” children.

Raichik’s appearance on Carlson’s program offers a further example of the ongoing “groomer” hysteria that has gripped the right-wing, who’ve accused LGBTQ+ people of building relationships, trust and emotional connections with children so they can manipulate, exploit and abuse them.

Raichik, who has made a name for herself by using “Libs of TikTok” to post hostile, mocking, or derogatory commentary about LGBTQ+ people and promotes harassment against teachers, medical providers and children’s hospitals, called the community “extremely poisonous” and received no pushback from Carlson whatsoever.

You can hear what Raichik said in the video below.

This is one of the most bigoted interviews I’ve ever heard. pic.twitter.com/0tVe9WONOH

Raichik continued to share homophobic conspiracies about LGBTQ+ people when she said:

“I think there’s something so unique about the LGBTQ community. It has become this cult and it’s so captivating and it pulls people in so strongly unlike anything we’ve ever seen, and they brainwash people to join and they convince them of all these things and it’s really hard to get out of it.”

“It’s really difficult and there are studies on this. There’s been a lot of reporting on this about people, parents who are like, ‘You know, my child is starting to say that they’re non-binary or transgender or whatever and what do I do? How do I stop this?'”

“And it’s really, really difficult. It’s unlike anything we’ve ever seen I think. It’s extremely poisonous.”

When Carlson asked her if “there is a spiritual component to all of this,” Raichik replied:

Raichik’s appearance on Carlson’s program is not a surprise when you consider that Carlson has hosted the founder of “Gays Against Groomers” on his program before.

Last month, the organization’s founder Jamiee Michell claimed in an interview with Carlson that gender-affirming medical care is to blame for last month’s mass shooting at Club Q, a gay nightclub in Colorado Springs, Colorado.

Mitchell ignored the medical consensus on how gender-affirming medical care has successfully lowered lifetime suicidal ideation among transgender people and proceeded to absolve the alleged shooter, saying the LGBTQ+ community will continue to be the target of similar attacks so long as the “evil agenda” of gender-affirming care is allowed to continue.

Many have condemned Raichik’s remarks and threw their support behind the LGBTQ+ community.

\u201cThis is exactly the same rhetoric that these bigots were using in the 1980s to support laws banning gay people from being teachers or adopting children. They will force gay people back into the closet or worse if they are given the power.\u201d

\u201cIt\u2019s just so wild to me that this has become normalized (again). It\u2019s not even that the playbook is different, it\u2019s literally the same nonsense from decades ago being brought back again in full force.\u201d

\u201cImportant part here: Carlson asks if there is a \u201cspiritual component\u201d and Raichik responds: \u201cI think they\u2019re just evil. And they want to groom kids.\u201d\n\nThis is at the core of transphobic messaging: they can\u2019t be fixed. They\u2019re inherently evil. \n\nOnly one solution to that.\u201d

\u201cThis is brazen hatred. If you think Chaya Raichik, Tucker Carlson and the right-wing don’t hate gay people after watching this, there’s something wrong with you as well. She’s also incredibly dumb to boot. These are the sick people who are considered leaders among conservatives.\u201d

\u201cThis is the level of public bigotry in the US. Notice how quickly it went from \u2018the trans people\u2019 to ALL LGBTQ. Yes, gays who joined in on the anti-trans hatred, we told you and you still threw us under the bus.\u201d

\u201cRhetoric like this is not only dangerous, it leads directly to harm. The fact that it\u2019s normalized and becoming more normalized is troubling for all marginalized groups, because once they get away with going after one group, they\u2019ll move onto the next\u201d

“Libs of TikTok” has helped set the agenda of right-wing discourse in attacks against LGBTQ+ people, public education and teachers though for a long time the identity of who was behind the account was a mystery.

Earlier this year, conservatives reacted with outrage after Washington Post correspondent Taylor Lorenz identified the person behind the account as Raichik, who is a Brooklyn Orthodox Jewish real estate agent and created the account in November 2020.

Raichik used the account to share inflammatory content, such as a clip of a woman teaching sexual education to children in Kentucky she branded a “predator,” a claim that quickly made its way to Fox News personality Laura Ingraham’s program.

The account has also served as a space vital to the spread of conspiracy theories alleging teachers are “grooming” children and proceeding with an “indoctrination” campaign designed to make children more tolerant of the LGBTQ+ community.

Libs of TikTok has proven so popular, garnering a follower base of more than 1.7 million, that it is “basically acting as a wire service for the broader right-wing media ecosystem,” according to Ari Drennen, LGBTQ program director for the watchdog group Media Matters.

But the fact Lorenz’s story used publicly available information–namely Raichik’s real estate license–to identify Raichik prompted conservatives to accuse The Washington Post of engaging in unethical behavior and Lorenz has been a target for right-wing homophobes ever since.

One thought on “Right-Wing Influencer Sparks Outrage on Tucker Carlson”