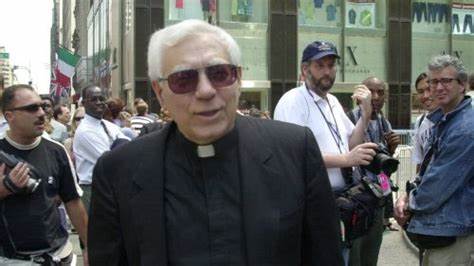 The Reverend Luis R. Gigante was always larger than life. A Roman Catholic priest, the son of Italian immigrants and the brother of New York mobsters, Gigante roamed the crime-ridden and rundown South Bronx with a baseball bat and a development company that built thousands of apartments for the poor.

But it turns out that even the legend can’t match the true scope of Gigante’s full life. After he died in October, his will revealed two more surprising facts: He was a multi-millionaire. And he left almost his entire fortune to one beneficiary – his 32-year-old son.

The revelation publicly reveals a brazen disobedience to one of the principles of the Catholic Church, according to which priests must remain celibate. The discovery was made in recent weeks by journalist Salvatore Arena, a former New York Daily News reporter who is preparing a book proposal about Gigante and has reviewed his last will and testament.

“I almost fell out of my chair,” Arena said.

As in his case, Gigante also made a minimal effort to hide his son from the outside world, as other priests had done in the past. The reverend’s personal life was the subject of decades of whispers in the Bronx and was an open secret among those closest to him.

Gigante may have eluded ecclesiastical scrutiny of his personal life through sheer force of personality, much in the same way that he used his towering personality to rebuild the run-down streets around his parish, make backroom deals as a Democratic kingmaker, and vociferously defend his criminal brothers and sisters. . It may have seemed hard to fathom that in the latter part of those busy years he was also raising his son in a quiet suburb north of the city.

Luigino Gigante was born in 1990 and grew up in Somers, New York, in Westchester County, an hour’s drive from Luis Gigante’s parish, St. Athanasius Roman Catholic Church in the South Bronx. He and his father lived with the boy’s mother and appeared to be an unremarkable suburban family—until the time each day came when Dad put on his Roman collar and returned to being a father.

“We had a quiet life,” Luigino Gigante said in an interview in Manhattan, where he goes by the name Gino. “He was proud of me. We did everything together.” As for his father being a priest, “it was like another quirk.”

Archdiocese of New York spokesman Joseph Zwilling said Sunday that several people he spoke to at the church knew nothing about Gigante’s son “beyond hearsay.”

“While each case will be assessed and dealt with on its merits, the priest who is the father of the child is expected to provide support to the child and the mother. However, in general, priests who have children leave the priesthood, as a rule, voluntarily,” Zwilling said.

Gigante said he was told that the hierarchy of the archdiocese knew that Louis Gigante had a child and decided to turn away. According to him, he was told the version of this scenario at his father’s funeral.

It is difficult to overestimate the fame of Gigante before the birth of Luigino. He founded the Southeast Bronx Community Organization, or SEBCO, in 1968, taking the first step in revitalizing Hunts Point, a scene of rubble and decay, and he expanded throughout the 1970s and 1980s.

The company was a central part of a network of non-profit and for-profit organizations involved in the construction, management and security of new facilities. In recent years, Luis Gigante earned an annual salary of $100,000 as president of SEBCO and additional sums through for-profit companies, including Building Management Associates and Tiffany Maintenance.

Those earnings amounted, according to Gigante’s will, to more than $7 million, almost all of which he left to his son in trust until he was 40 years old.

Earlier, he shrugged his shoulders when asked about wealth. “I didn’t take a vow of poverty,” he said in a 1981 profile. – People think that I am not paid and that I am a saint for this. This is their problem.”

At the same time, he became involved in politics and, not deterred by his defeat in the 1970 congressional primaries, took a leading role in the local Democratic district and was also a member of the city council for a short time.

“At first there were those who thought it was wrong for a priest to be a politician,” he told The New York Times in 1972. “But later, when I did them a few favors, these same people changed their minds.”

His last name was more widely associated with one of his brothers, Vincent (Chin) Gigante, boss of the powerful Genovese family of the New York mob. In the years that followed, Vincent Gigante became a strange presence in Greenwich Village, roaming the streets in slippers and a dressing gown, believed to be a years-long ruse to feign mental illness and avoid prosecution.

Louis Gigante supported his brother, saying that he was really sick and suggested that the mafia was an invention of the media. He was active in other high-profile moments; in 1989, he put up $25,000 to bail out one of the Central Park Five.

The priest once lived in the rectory at St. Athanasius, but in 1990 he commuted to a house in Westchester, friends said. He had a son there.

Attempts to contact Luigino Gigante’s mother were unsuccessful; He said she did not want to talk to reporters.

Priests have had children since the early days of the church – indeed, priests once had wives and children. But around the twelfth century, celibacy became a condition for joining the priesthood, at least in writing, if not always in practice.

Today, there are enough priests who have broken their vows of celibacy and fathered children that the Vatican created general guidelines for dealing with them, which were published in 2019. There is also a support group for children of priests, Coping International, which has about 50,000 members. 2019. Some of these children were the products of rape; others were never recognized.

A few years ago, a priest who was found to have a child would have been fired. But in guidelines published in 2019, the church expressed greater flexibility in cases where a priest returned to celibacy and recognized his child (provided neither parent wants to marry).

Gigante said his father’s life as a priest was a simple fact in the house and not well hidden.

He said that his father would introduce him to his friends in a humorous and lyrical tone borrowed from the Bible: “This is my son, in whom I am well pleased.”

Gigante said, “I wasn’t a secret.”

Several people interviewed for this article who lived or worked in the South Bronx during Louis Gigante’s tenure there said whispers were often heard there.

“There were always rumors,” said Wanda Solomon, who crossed paths with Gigante as executive director of the community group Mothers on the Move. “As they say, these are urban legends or whatever.”

But there was a lot of work to be done, and no one seemed willing to investigate further, she said.

For those who worked closely with Gigante through SEBCO, there was no need to whisper. “It was common knowledge — no one really argued about it,” said Peter Cantillo, a former community council district manager who went on to work for SEBCO. “Father was larger than life.”

Sister Eileen McGrory of the Sisters of Mercy Center knew about Gigante, but not that he had a son. She wondered how it had been kept quiet. “Maybe there were people who said, ‘Well, look at all the good things he’s done — let’s take a breather,’” she said.

His friends believe that the good will of the priest outweighed any outrage that might have arisen. “People thought he was such a great guy, he did so much for the community,” Cantillo said. “He was a man, he had a child. Frank Sinatra’s song “I did it my way” epitomizes him. He did everything the way he wanted.”

Gigante remained associate pastor at St. Athanasius for 12 years after Gene was born. In 2002, he retired from the Archdiocese of New York at the age of 70. Luigino Gigante said his father wanted to spend more time with him when he became a teenager. Later, a statue of Louis Gigante was installed in the church.

In 2021, two lawsuits were heard. Gigante sexually abused a girl in the early 1960s, when she was about 10, and a boy in the 1970s, when he was 9 or 10 — two of hundreds of cases involving priests brought under the law of the state. The Victims Act, which allows victims to sue for allegations of past sexual assault. At the time of his death, the cases were settled. Luigino Gigante said his father vehemently denies the claims.

Gigante attended the City College of New York. He said that before he started there, his father warned, “People might ask about me.”

In all of college, only once did a professor ask about Gigante’s family — and that was about his famous uncle, “Chino,” he said.

His father used to say, “Your name doesn’t define who you are, it’s what you do,” Gigante said. “He always wanted me to be who I wanted to be.”

As time went on, after Gigante’s retirement, any ounce of sanity seemed to disappear. Luigino Gigante worked for a while at SEBCO, where everyone knew him as the boss’s son.

In 2017, Gigante opened Waypoint Cafe, a popular esports and internet cafe, in Manhattan’s Lower East Side. According to him, his father was present at the grand opening.

After Louis Gigante died on October 19, Luigino Gigante organized a funeral mass at St. James Catholic Church in Chatham, New York. He said a friend of his father’s at SEBCO told him a story that sounds like a mixture of truth and legend that surrounded Louis Gigante throughout his life.

“After you were born, your father was called” to the archdiocese headquarters in Manhattan, Luigino Gigante recalled the friend saying. Gigante was later told his father came back and said, “They asked me if I had a son, and I said, ‘Yes,’ and left,” the friend recalled. “And that’s it.”

This story was originally published on nytimes.com. Read here.