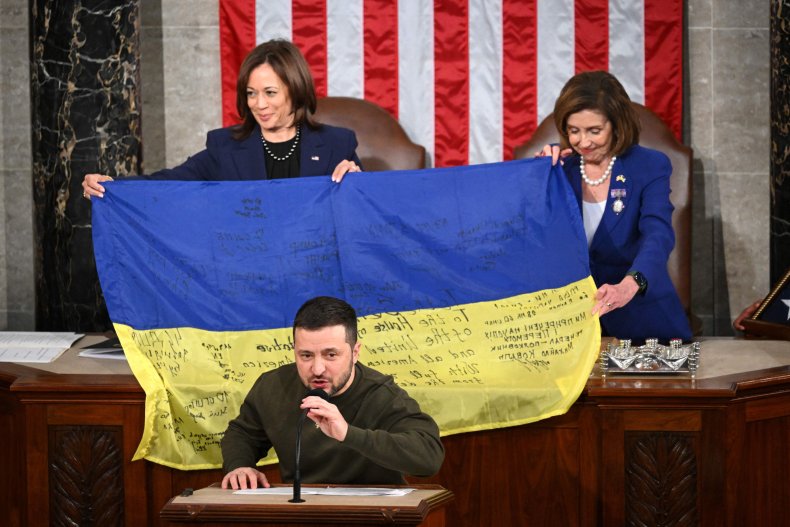 During a historic joint meeting of Congress on Wednesday, Ukrainian President Volodymyr Zelensky argued that more aid for his war-torn country wasn’t just about helping Ukraine, but also about protecting democracy across the globe and curbing Russian aggression.

Zelensky’s rousing address may have been difficult for lawmakers to understand at all times, but the energy and passion came through in a packed House chamber.

Zelensky thanked Congress for its support thus far of a war that’s approaching its one-year anniversary. But he also pleaded for more aid and asked lawmakers to not give up on Ukraine now.

“We have artillery, yes, thank you. Is it enough? Not really,” Zelensky said.

The Ukrainian president, dressed in a plain green military sweater, said next year would be a “turning point” in the war to repel a Russian invasion. But he was clear that he did not view U.S. assistance to Ukraine as a gift.

“Your money is not charity,” he said. “It’s an investment in the global security and democracy that we handle in the most responsible way.”

Security was heightened all around Capitol grounds Wednesday. Reporters were advised to grab their dinners before 5 p.m., when sweeps in the building were slated to begin. Limited guests were allowed in the upper galleries to watch the speech. It was similar to the security measures employed for State of the Unions delivered by the president of the United States. This trip is Zelensky’s first outside of Ukraine since the onset of the war—at least, as far as the public knows.

Members of the House and Senate meandered into the chamber around 7 p.m., exchanging pleasantries within their caucuses and occasionally across the aisle. A few dozen wore Ukraine’s colors—yellow and blue—in their scarves, ties and elements of their outfits. The Democratic side of the chamber was almost entirely full, sparing a few seats. The Republican side was a tad less so, but still decently attended throughout. A handful of Democrats including Sen. Jon Tester (D-MT) and Rep. Jerry Nadler (D-NY), among others, were spotted sitting alongside Republicans.

The crowd of both Democrats and Republicans roared with cheers and a standing ovation as Zelensky walked while a handful of Democrats waved a Ukraine flag in his direction. The Daily Beast only spotted a few Republicans not clapping during Zelensky’s entry, including Reps. Lauren Boebert (R-CO), Matt Gaetz (R-FL) and Tim Burchett (R-TN), who remained the visibly least enthused trio in the chamber during the speech while occasionally scrolling through their phones.

Boebert doesn’t seem too interested in the speech pic.twitter.com/grOEaxwtZd

While delivering his address, Zelensky minced no words. He described a nation beaten down but persisting. Members stood to applaud his remarks every few lines, which he delivered in stilted English.

“Against all odds and doom and gloom… Ukraine is alive,” Zelensky told the chamber to a standing ovation.

Beyond the backdrop of Zelensky’s historic speech were his pleas for aid for his war-torn nation. The latest government funding package, which could pass the Senate as early as Wednesday night, would include an additional $45 billion for Ukraine. That number has been a point of contention for Republicans who’ve suggested the U.S. has done enough.

Earlier in the day, Biden and Zelensky greeted one another at the White House for an Oval Office meeting. Zelensky presented Biden with a gleaming Ukrainian cross for military merit that Biden called “undeserved, but much appreciated.” The duo later held a joint press conference, occasionally exchanging cheeky grins at times in a display of camaraderie between two leaders.

“It’s important for the American people and for the world to hear directly from you, Mr. President, about Ukraine’s fight and the need to continue to stand together through 2023,” Biden said at the event.

House Speaker Nancy Pelosi, who will soon be retiring from leadership, also took time Wednesday to recognize the historic moment.

In a “dear colleague” letter Wednesday morning, Pelosi described the speech as a “a moment fraught with meaning for [her].” During his own tenure in Congress, Pelosi’s father, Rep. Thomas D’Alesandro Jr. (D-MD) became a member of Congress in 1941, when Winston Churchill addressed Congress to enlist the U.S.’ support in defeating the axis powers of Germany, Italy and Japan in World War II.

“It is particularly poignant for me to be present when another heroic leader addresses the Congress in a time of war – and with Democracy itself on the line,” she wrote.

Earlier in the evening, Pelosi and Schumer gave Zelensky a tour of the U.S. Capitol. McConnell joined in midway.

At the end of his remarks, Zelensky handed Pelosi a Ukraine flag, and Pelosi handed Zelensky a framed U.S. flag that had hung over the U.S. Capitol Wednesday in honor of his visit. He carried it out through the middle of the aisle—while senators ushered themselves out, and the House proceeded on with business as usual.