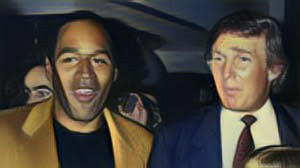 Football legend O.J. Simpson and former president Donald Trump are infamous in their own ways.

However, back in the 1980s, Simpson and Donald Trump were American media darlings and often rubbed shoulders in New York City while attending soirees with models.

“[We were] around,” Simpson said about how he met Trump. “Just around, you know, in New York. I lived in New York doing NFL Live and we kind of had the same tastes in ladies,” he said before laughing.

“What was the taste at the time?” the host asks.

“C’mon now,” Simpon said while throwing up his hands. “Models. Models. Because he knew, you know, Eileen Ford. I knew Eileen Ford. We found ourselves at those types of events.”

“So you and Trump are kind of like wingmen sometimes?” the host asked.

That would be a pretty deadly duo, Trump and O.J.” the host joked, to which Simpson responded with a chuckle.

The video includes many photos in which Trump and Simpson can be seen standing next to women. Trump, for his part, has yet to comment on the story.