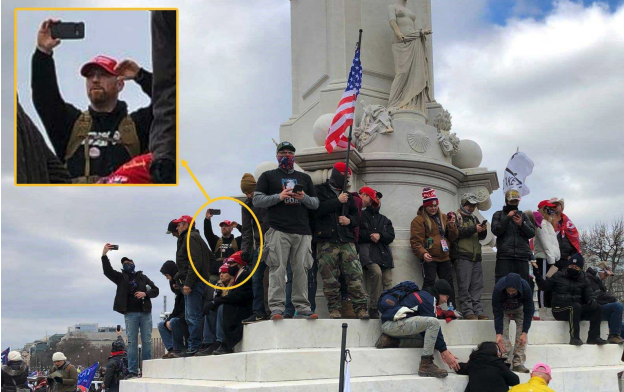 In the latest in an ever-growing list of criminal charges brought against January 6 rioters, a Tennessee man was arrested on Friday for allegedly plotting to kill the FBI agents who were investigating him.

With the House of Representatives committee on the insurrection preparing to deliver its final recommendations on Monday, 34-year old Edward Kelley of Maryville was charged with conspiracy, retaliating against a federal official and solicitation to commit a crime of violence, reported CNN.

Kelley was already facing charges of assaulting an officer during his participation in the 6 January riots.

Austin Carter, from Knoxville, Tennessee, was also arrested and charged for his involvement in the plot, according to the justice department.

The two men allegedly had a list of 37 law enforcement agents they planned to assassinate, including the agents who arrested Kelley in May for his involvement in the January 6 attack and those who were present for a search of his home, reported the New York Times.

An unnamed acquaintance, who alerted law enforcement to Kelley’s plans, obtained the list from Carter, as well as a thumb drive from Kelley’s home that showed a video of law enforcement officers approaching his home on the day of his arrest, according to court papers.

The acquaintance also captured several recordings of Kelley and Carter talking about their assassination plans. At one point, Kelley asked the acquaintance to “stash some stuff” at his home, later clarifying that he meant weapons and ammunition. Kelley also told the acquaintance he planned to recruit people to attack the FBI’s Knoxville office, according to the papers.

Also on Friday, another January 6 rioter who is a QAnon supporter and self-described “poster boy” of the insurrection was sentenced to five years in prison.

Douglas Jensen, 43, of Iowa was sentenced to 60 months, after a judge ruled that he had led rioters into the breached Capitol building and toward the police officer Eugene Goodman, actions that could have led to mass death, reported the Washington Post.

The developments are just the latest in a meticulous and effective law enforcement investigation that has aimed to hold the January 6 attackers to account. As of 7 December, 964 people had been arrested for their involvement in the insurrection, charged with a number of crimes including assault on an officer, destruction of government property and theft, reported Insider.

The list of those arrested for their involvement is expected to grow as the FBI continues to look through media and footage from the Capitol attacks.

Of the 964, about half – 465 – have pled guilty. The longest sentence to date has been for former the NYPD officer Thomas Webster, who got 10 years in prison in September after a judge ruled he assaulted an officer with a metal flagpole when the officer tried to defend the Capitol.

Meanwhile, the separate House investigation into the attacks is aiming to issue its formal recommendations on Monday. It is reportedly considering several criminal referrals against Donald Trump, which could include suggested charges of obstruction of an official proceeding of Congress and conspiracy to defraud the United States.