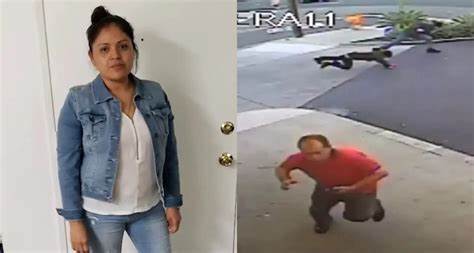 On Sunday, Dec. 4, a 36-year-old Calif. mom of three was critically injured by a stray bullet in a drive-by shooting targeting two teenage boys, according to Santa Ana Police. She died days later from her injuries.

Maria Del Refugio Mora of Santa Ana was later identified as the unintended victim in the shooting, which occurred in a parking lot after Mora left a local grocery store to pick up food for her family.

In surveillance footage of the incident, a white sedan can be seen pulling up outside the parking lot. Someone inside the car takes aim at two teens, who begin running from the gunfire. One of these bullets hit Mora in the upper torso.

Police responded to the scene around 4:30 pm, where Mora was found on the ground, critically injured. Though she fought for her life in the hospital, Mora succumbed to her wounds on Friday.

No suspects have been arrested in connection with the case.

In a statement, Santa Ana police wrote, “The circumstances surrounding this shooting are currently being investigated, however detectives believe the motive could be gang related. Detectives are attempting to identify and locate any witnesses who can shed light on this incident.”

According to a GoFundMe posted by the victim’s family, “[The boys] were not injured, just [Mora] who took the unfortunate hit.”

Mora was the mother of three children between the ages of 3 and 15, according to the GoFundMe. She also left behind a husband and additional bereaved family members. “She never made it back home to her kids. They didn’t even get to say goodbye,” the page reads.

Anyone with information regarding the shooting should call the Orange County Crime Stoppers at 1-855-TIP-OCCS.

Read the original article on People