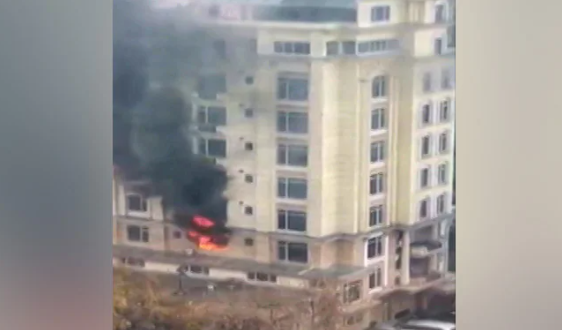 Three people were killed and others injured after ISIS gunmen attacked a hotel, in “bomb vests.”

The assailants stormed the building which is used solely by foreigners and predominantly by Chinese nationals in Kabul, Afghanistan on Monday.

Residents reported explosions and gunfire and photos and video posted on social media showed smoke billowing from the building during the attack which lasted a few hours.

The group said two of its personnel “attacked a big hotel frequented by Chinese diplomats and businessmen in Kabul, where they detonated two explosive devices hidden inside two bags.”

They said one guy targeted a party for Chinese guests and the other targeted the reception hall. Reports say they were wearing so-called bomb vests.

An Italian-run emergency hospital less than a mile away said it had received 21 patients from the attack, three of whom were dead on arrival.

Chinese foreign ministry spokesman Wang Wenbin confirmed that five Chinese nationals were wounded in the attack on the Longan Hotel and analysts have cannily unveiled how the attackers stayed in the hotel prior to the attack.

Pictures of the hotel room on the website show the same chair and panelling on the walls as in the video ISIS posted when they claimed the attack, as spotted by a BBC Journalist.

Two foreign residents were injured when they jumped out of windows to escape, said Zabihullah Mujahid, the Taliban government’s spokesman.

The terrorist attack came one day after the Taliban said China had asked them “to pay more attention to the security” of the Chinese embassy in Kabul.

And last week, ISIS-k also claimed responsibility for an attack on Pakistan’s embassy in Kabul, in an attempt to assassinate the head of the diplomatic mission.

She said the Taliban: “really don’t have the capability to go after it.”

On Saturday, Pakistan said Saturday its security forces had intercepted and killed four Islamic State operatives in a remote mountainous district near the Afghanistan border.

“The attacks against countries and individuals supporting the Taliban, directly and indirectly, will increase,” Ahmad Saeedi, a political analyst and former diplomat told CBS News.

He continued: “Afghanistan is struggling with a regional intelligence war in which everyone is trying to pursue their own interest.”