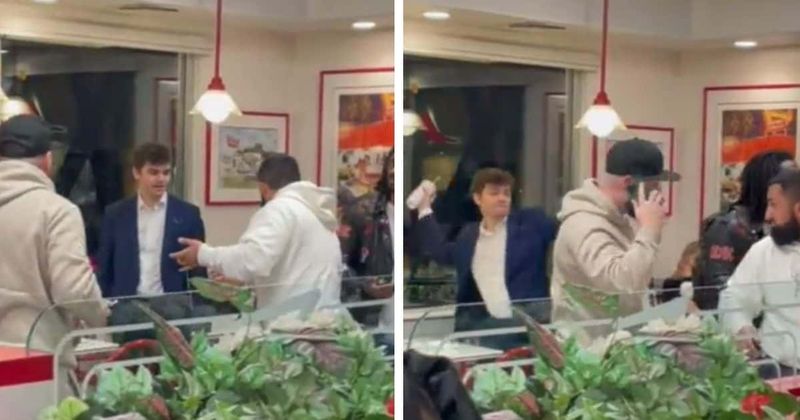 White nationalist and alleged Holocaust denier Nick Fuentes was caught on camera throwing his drink at a couple during an argument inside an In-N-Out in Los Angeles. A witness said Fuentes was dining at the burger joint when a couple approached him. Both parties soon got involved in an argument.

It is unclear what the group was fighting over. However, the couple, who cannot be seen in the clip, reportedly got angry and began throwing ketchup cups at the known supremacist and his friends, TMZ reported. On Saturday, December 3, Fuentes denied the person in the video was him.

“It is Nick Fuentes,” said the woman while filming him. “He pretended that it wasn’t him, but it’s really him.” As Fuentes and his group appeared to be leaving the eatery, the woman said, “What the f**k? F**k Nick Fuentes. You racist.”

In another video, Fuentes can be seen standing calmly at a table, and then suddenly hurling his drink across the restaurant. The liquid was seen spraying everyone nearby. The drink reportedly did not hit the couple he was aiming at. Fuentes left five minutes later. Police were reportedly not called.

Fuentes has recently been making headlines after he was seen with Kanye West, dining at Mar-a-Lago with former president Donald Trump. Fuentes is reportedly the leader of what is known as the Groyper Army. He reportedly holds an annual White nationalist conference as counter-programming to CPAC. West and Fuentes’ dinner with Trump sparked frenzy as social media and public figures condemned the former president for hosting the supremacist and West, who sparked controversy in recent weeks with his antisemitic remarks.

Nick Fuentes throws strawberry shake at crowd after getting burger thrown at him pic.twitter.com/5xBhjqRKSS