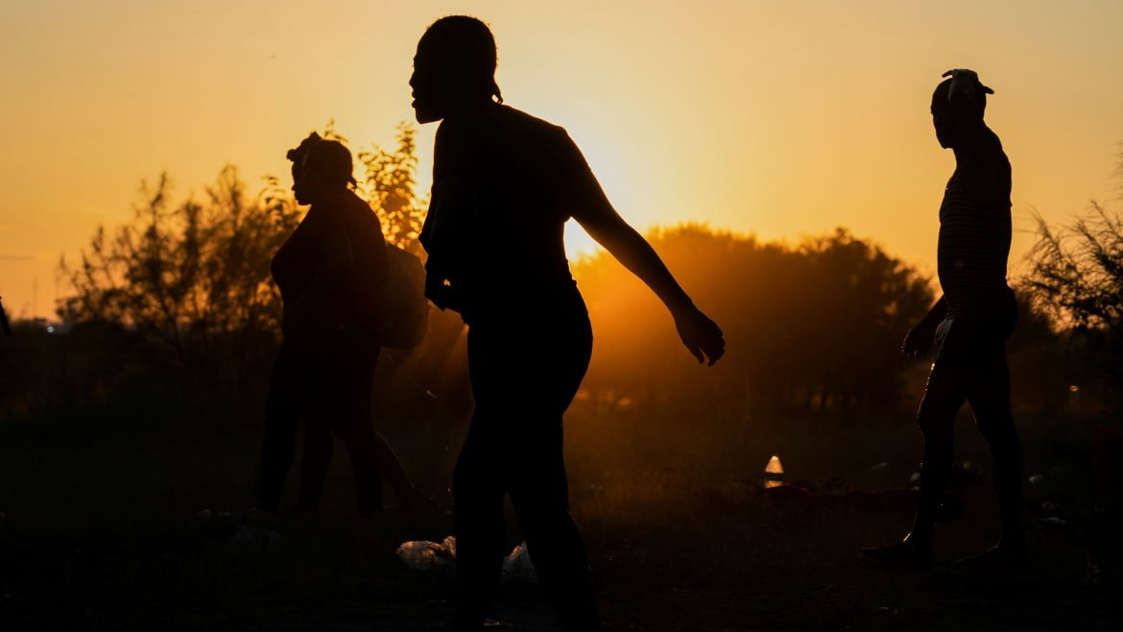 Rose, 29, left Port au Prince with her little sister Dominique and her baby daughter five years ago. They could never get back on their feet after the 2010 earthquake that devastated the country so they decided to head for Brazil where well-paid jobs were being advertised for the Olympic Games in 2016.

When the Olympics ended, the work was over. They managed to survive for four more years in a variety of jobs paying less than minimum wage but Brazil denied them any possibility of accessing permanent regular status in the country.

So, when they read in a private Haitian WhatsApp group about the opportunity to enter the U.S. through a porous spot at the Mexico border and legally request political asylum, they started a three-month journey to the border.

When they started the 5,000-mile voyage, Rose had a 6-month-old baby girl as well as her eldest daughter, who was now 5.

“We travelled in a group of 50,” Rose told The Daily Beast while looking across the Rio Grande from Ciudad Acuña in the northern Mexican state of Coahuila, into Del Rio, Texas.

“It would’ve been impossible for us travel alone and not get kidnapped or abused,” she said, in a shy Brazilian Portuguese.

The group used smugglers on some of their path, according to the sisters.

“We paid smugglers in Colombia, in Ecuador, and then again in Guatemala,” she said.

Since 2010 and then after the assassination of their president earlier this year, tens of thousands of Haitians like Rose and Dominique, have fled their country in search of a more economically and politically established one that allows them to stay legally.

“We don’t have anything back in Haiti,” Rose said. “We don’t even have a president, or jobs, or even a house.”

Once at the Rio Grande at the U.S.-Mexico border, Rose and Dominique, 26, went over together holding the girls over their heads to cross via a dam and camped for a few days below the Del Rio International Bridge, which has quickly become a global symbol of the perils of migration in recent days.

The sisters were confused by what they saw; people on the WhatsApp group had promised that the U.S. authorities were being friendly and taking them in to start their asylum process on American soil. In reality, it felt more like a trap. The heavy presence by U.S. authorities and a non-stop helicopter flying over their heads couldn’t be signals of a friendly country.

Inside the camp, which was set up as a staging area by the Americans, rumors about what the authorities would do ran wild. Some said they would be processed and then released onto the streets of Del Rio. But at the same time, they were hearing from others who had been sent all the way back to Haiti.

“They were not taking us in, it was a trap to send us back to Haiti,” Rose said.

They decided to swim back into Mexico, where they felt safe that they were at least safe from deportation to Haiti, but they kept hearing of people who had actually been released onto U.S. soil.

“We decided to flip a coin. One of us would stay in Mexico and the other one in the U.S.” Rose said. So, Dominique crossed back again, this time pulled by a rope stretched between the two countries.

As more Haitians kept arriving—growing to be more than 15,000 in just a couple of weeks—multiple federal U.S. authorities put on a rarely seen show of force which included aggressive charges by agents on horseback using whips to corral some of the migrants away from the Rio Grande.

Last Monday, U.S. Secretary of Homeland Security Alejandro Mayorkas arrived in Del Rio and addressed Haitians, whom he told: “Our borders are not open.”

“I want to make sure that it is known that this is not the way to come to the United States… Trying to enter the United States illegally is not worth the tragedy, the money, or the effort,” he said.

It was two days after she was pulled across the river that Rose heard from Dominique. She was back in Haiti.

“They didn’t even tell us where we were going,” Dominique told The Daily Beast, speaking from Port au Prince on a borrowed phone. “They asked us some questions, took some fingerprints, took our passports and ID’s and put us into a van to the airport.”

“I learned I was in Port au Prince just as we landed and because there were other people who told me I was landing in Haiti,” she said.

Dominique described Port au Prince as being like a “place in chaos,” where “everyone is trying to escape.”

For now, Rose was safely in Mexico, but The Daily Beast can confirm that the Mexican authorities have surrounded every highway to and from Ciudad Acuña and started raiding the city. They plan to bus or fly the families back to Haiti.

“We are going to have to get them little by little back to Haiti,” said a Mexican federal agent posted at a point by the Rio Grande.

Rose was impatiently waiting by the river, trying to choose a side of the border to stay, but it no longer matters which side of the coin she chooses, the chances are that she along with her two daughters will be sent back to Haiti and have to start again from square one.

“Haiti is the only place in the world I can’t stay,” she said. “I don’t mind starting the journey all over again.”

4 thoughts on “Two Sisters Flipped a Coin, One of Them Was Sent to Hell”