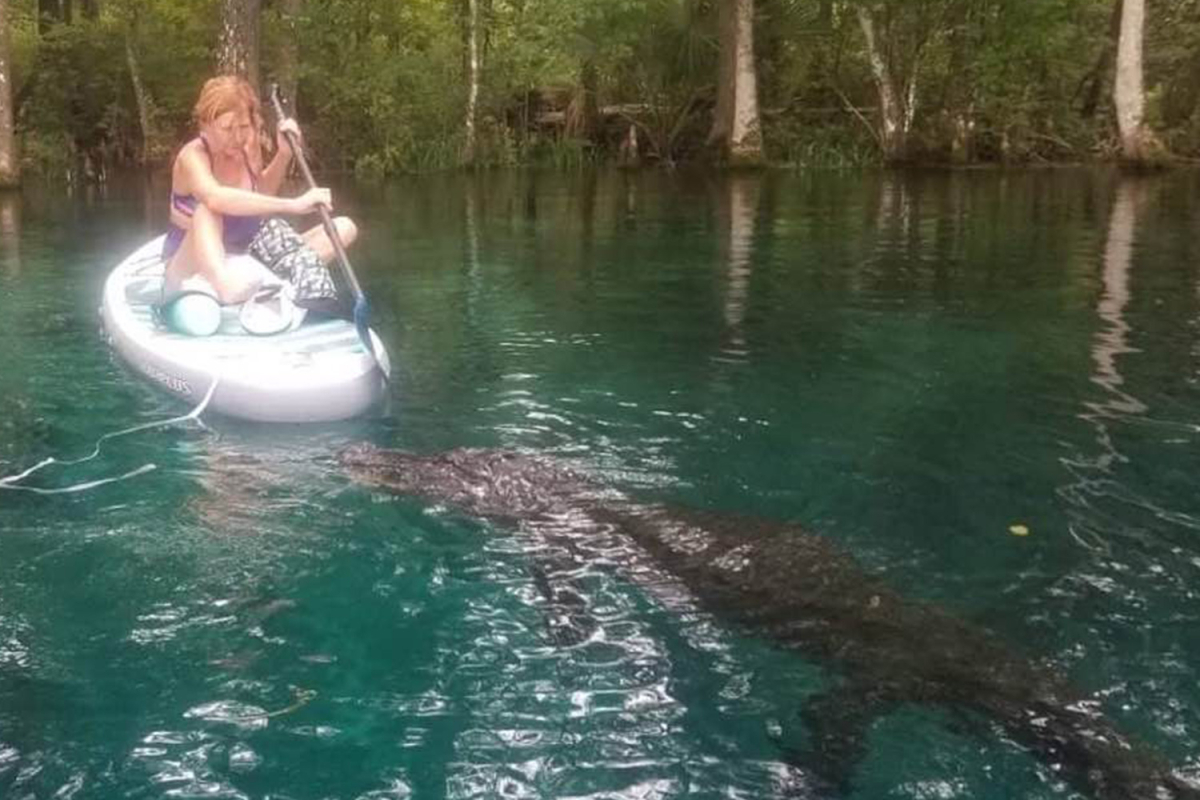 A Florida paddleboarder recently had a dangerously close encounter with a wild alligator.

In multiple videos posted to Facebook, a gator can be seen calmly approaching a woman sitting on her paddleboard. According to the woman, the gator even attempted to eat her board.

Though alligator attacks have increased over the years due to a variety of factors, gators don’t typically approach humans because they don’t regard humans as prey. With that in mind, the woman believed someone has been feeding the gator, an incredibly dangerous—and illegal—act.

“Why are you messing with me?” Vicki Reamy Baker asked the gator in her now-viral Facebook video with more than 200,000 views. “Why are you trying to bite me?”

As she asked these questions, the gator very calmly floats away from Baker, who is sitting on her board.

But it’s at this point that she claimed the gator “came after [her] and tried to bite [her] paddleboard.”

Once she’s paddled away, she says: “Somebody’s been feeding that gator—makes them very dangerous.”

Newsweek was unable to independently verify if the gator is being fed. However, Baker is right about one thing: feeding alligators does make them a threat.

According to the Key West Aquarium, alligators don’t regard humans as prey. That said, alligator attacks on humans have increased due to habitat loss and “irresponsible behavior of humans.”

“Irresponsible” behaviors include harassing gators, approaching them and feeding them.

Wild alligators have a natural fear of humans, said the Orlando Sentinel. But when humans feed alligators, the reptiles lose that fear. When that fear is lost, attacks will happen.

To protect both alligators and humans, Florida law prohibits the feeding of alligators.

The alligator in Baker’s videos did appear to be very comfortable around humans. Perhaps too comfortable.

The second video posted by Baker showed the gator calmly and confidently swimming right up to Baker. She says, “get away from me,” twice as the gator inches closer and closer.

Once the gator is too close for comfort, Baker pushes the reptile with her paddle, and it hisses as they drift apart.

“I had to push it away with my paddle and then I paddled away fast,” she told Fox 35 News.

She also posted several photos of the interaction that show the gator’s snout touching her board.