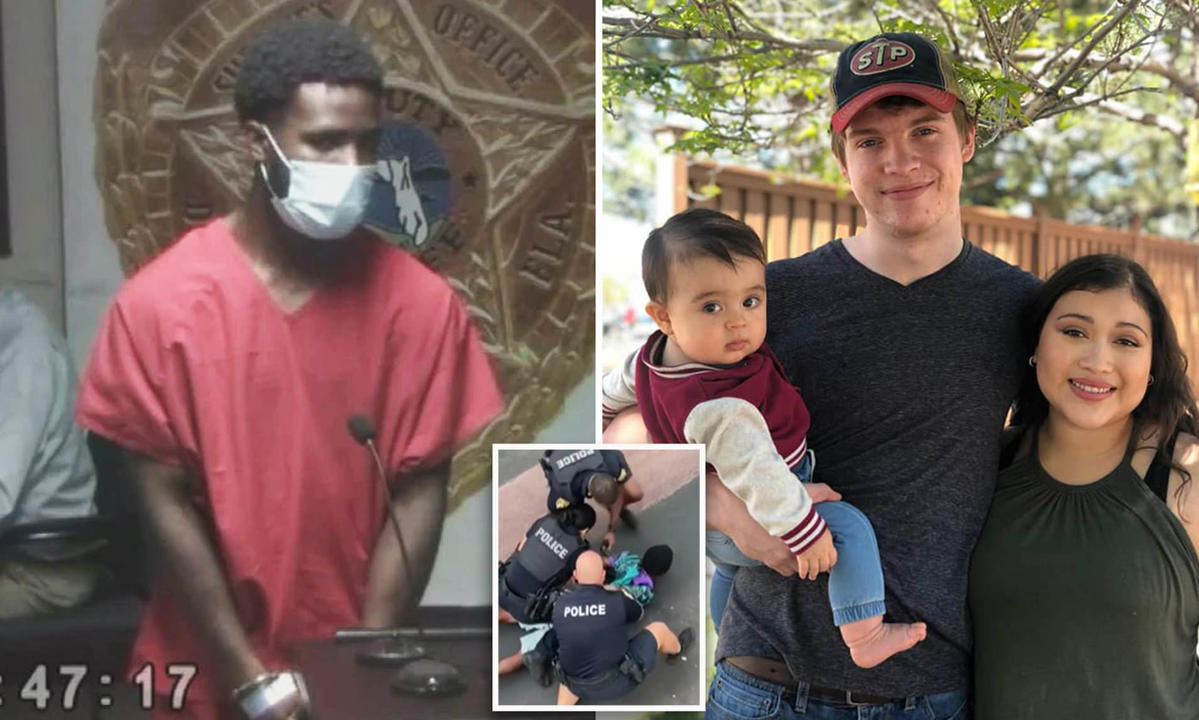 Harrowing new details have emerged in connection with the deadly shooting that claimed the life of a young father in Miami Beach on Tuesday, including how the suspected killer pointed a gun at the victim’s one-year-old son and said, ‘It’s time to die.’

Tamarius Davis, 22, a UPS driver from Georgia, was arrested on a count of murder for allegedly gunning down Dustin Wakefield, 21, who was visiting Miami Beach with his family, including his wife and baby son.

Wakefield’s uncle, Michael Wakefield, told DailyMail.com on Thursday that the gunman, whom he slammed as a ‘dirt bag,’ approached his nephew and other relatives at random as they were having dinner at an outdoor Mexican restaurant on Ocean Drive.

‘The suspect came up to Dustin and said “ it’s time to die”,’ Michael recounted in a Facebook Messenger exchange. ‘The suspect pointed the gun at my nephew[‘s] son then Dustin replied back to him saying “he’s just a baby” and then Dustin stood in front of he’s [sic] son and then he was shot.’

According to the uncle, who was not present during the attack but was told about it by Dustin’s mother, his nephew sustained multiple gunshot wounds, including to the head.

As it was previously reported by news outlets citing eyewitness accounts, Davis then allegedly celebrated by dancing over Dustin’s body as he lay dying on the ground.

‘You can’t wrap your head around this type of evil,’ the uncle said.

Michael added that he was not surprised that Dustin had put himself in harm’s way to protect his son, saying that despite his young age, Dustin was an ‘old soul with honor and pride’ who always put his family first.

‘Dustin was a true light in this world,’ he added.

After his arrest, Davis, of Norcross, Georgia, told investigators he shot Dustin because he ‘was high on mushrooms, which made him feel empowered,’ according to his arrest report.

Michael Wakefield vehemently rejected Davis’ explanation, arguing that being under the influence was no accuse for his purported actions.

‘The moment he took the drugs It was a conscious decision on his part that changed his life and Dustin’s life forever in his own hands,’ the uncle stated. ‘We have to be accountable for our decisions that we make in life…’

The victim’s family are still grappling with many unanswered questions, including how Davis ended up at the restaurant on Tuesday? Where did he get the gun, and why did he choose to attack Dustin?

When asked what would he like to tell Davis, if given the chance to address him, Michael Wakefield replied: ‘I would say to him it’s too bad you didn’t have five minutes to sit down and talk to Dustin you would’ve walked away after that conversation friend for life.

‘You took away Dustin’s life. But Dustin’s Spirit and light will shine bright for the rest of time.’

The uncle added: ‘I hope Dustin’s face and spirit never leaves your mind and soul.’

Davis allegedly told police he approached the patio area of the La Cerveceria restaurant just before 6.30pm and randomly decided to shoot Wakefield, who was on vacation from Castle Rock, Colorado with his young wife and their son.

In a short video taken immediately after the shooting and obtained by WSVN-TV, the gunman can be seen dancing while people are heard screaming. The gunman then walks up some steps, the weapon in his hand.

A witness told CBS Miami that after the shooting, Davis celebrated by dancing over or on top of Wakefield.

Wakefield was rushed to Jackson Memorial Hospital, where he died of his injuries.

The victim’s uncle said of his nephew, who worked in construction, ‘He was the kindest kid. He loved his family. He loved being a dad.’

Dustin’s father and stepmother, Matt and Angela Wakefield, released a statement to Denver7, highlighting their son’s ‘love and generosity,’ and praising his act of heroism that saved his baby’s life.

‘For us, his family, he was the best son/brother/uncle/cousin/nephew/grandson you could ask for,’ the Wakefields stated. ‘His heart always put others first, even from a young age. As a man, he was a faithful and loving husband. Karina is the love of his life, and she knows it. His love for her should inspire us.

‘As a father he was full of love and pride. His son knows he is loved. As a friend, there is not a person alive who did not feel his kindness, acceptance and love always from him.’

The statement continued: ‘We take great pride and comfort in the fact that we were blessed with the man who stepped in front of the bullet to save others. He has always been and he will continue to be our hero.’

Davis fled the restaurant, police said, and was captured in a nearby alley. Cellphone video obtained by the Herald shows Davis lying spread-eagle on his back and smiling as three officers approach with their guns pointed towards him yelling commands, warning him that if he touches his gun he will be shot.

Tommy Davis, the suspect’s father, told The Associated Press that his son, who works as a UPS driver, had traveled to Miami Beach with some friends. He said his son has never been in trouble or had mental health issues. No arrest record for the younger Davis could be found.

‘This is an unlikely thing,’ the senior Davis said. ’We are trying to find out what happened. You can imagine we were shocked.’

He said he didn’t know whether his son would ingest mushrooms or other drugs.

‘You think you know your kid, but you don’t,’ he said. ‘It is possible someone gave him something. That is something we need to find out.’

Davis is charged with second-degree murder, and also for attempted murder for allegedly shooting at another man while chasing him moments before Wakefield’s killing.

During his initial court appearance, Judge Mindy Glazer ordered Davis held in the Miami-Dade County Jail without bond, telling him: ‘you shot and killed somebody in cold blood.’

A GoFundMe campaign has been launched to support Wakefield’s family, including his wife of two years and their son.

Original Article: UPS driver ‘pointed gun at baby and said it was “time to die” before killing his dad’ | Daily Mail Online