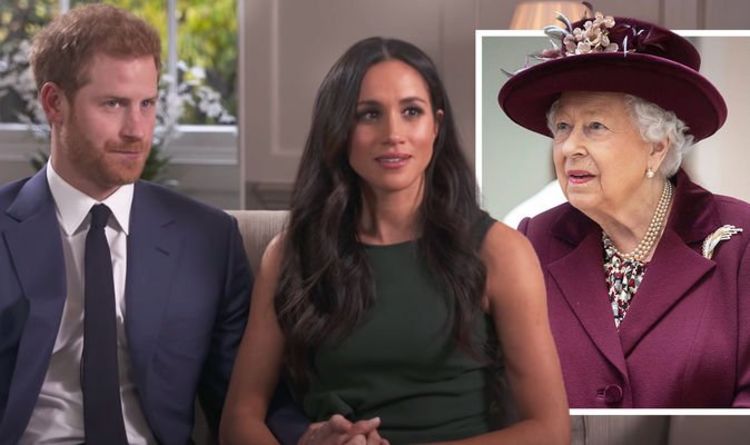 Meghan Markle and Prince Harry sent shockwaves around the world earlier this year after making several incendiary claims when interviewed by Oprah Winfrey. Now a new chapter of “Finding Freedom”, a book about the couple by royal experts Omid Scobie and Carolyn Durand, has been featured in PEOPLE.

It reads: “The Queen’s ‘recollections may vary’ comment ‘did not go unnoticed by the couple, who a close source said were ‘not surprised’ that full ownership was not taken.

“’Months later and little accountability has been taken’, a pal of Meghan added. ‘How can you move forward with that?’”

Meghan and Harry have disassociated themselves from Finding Freedom, making clear the authors of the unauthorised book do not speak for them.

But leading royal author Angela Levin has been left furious by the suggestions in the new book, and launched a stinging attack against Meghan and Harry.

The expert, who has met and written a book on Prince Harry after spending long periods of time with him, raged on Twitter: “If this is true, the couple’s arrogance and lack of respect are beyond words.

During the bombshell interview with Oprah broadcast around the world, Meghan claimed there were “concerns and conversations” from within the Royal Family about the skin tone of the couple’s son Archie ahead of his birth in 2019.

The Queen with her grandson Prince Harry and his wife Meghan Markle (Image: GETTY)

The Duchess also said since joining the Royal Family, she had been suffering from mental health problems, including having suicidal thoughts

A rare statement was quickly released by Buckingham Palace on behalf of the Queen, in which she said: “The whole family is saddened to learn the full extent of how challenging the last few years have been for Harry and Meghan.

“The issues raised, particularly that of race, are concerning.

“Whilst some recollections may vary, they are taken very seriously and will be addressed by the family privately.

“Harry, Meghan and Archie will always be much-loved family members.”

Meghan made reference to Archie during the interview, claiming there were “concerns and conversations about how dark his skin might be when he was born”.

She added: “That was relayed to me from Harry.

“Those were conversations that family had with him.”

Husband Prince Harry sat alongside the Duchess during the interview, added: “That conversation, I am never going to share.

“At the time, it was awkward, I was a bit shocked.”

The couple would not name the royal who allegedly made the comments, with Meghan warning it would be “very damaging to them”.

But days after the interview was broadcast, Oprah said the royal couple had told her those remarks were not made by either the Queen or her husband Prince Philip.

Harry’s older brother Prince William quickly put up a rugged defence during a visit to a school in London, insisting the royals are “very much not a racist family”

The two brothers then reunited for the funeral of their grandfather Prince Philip in April.