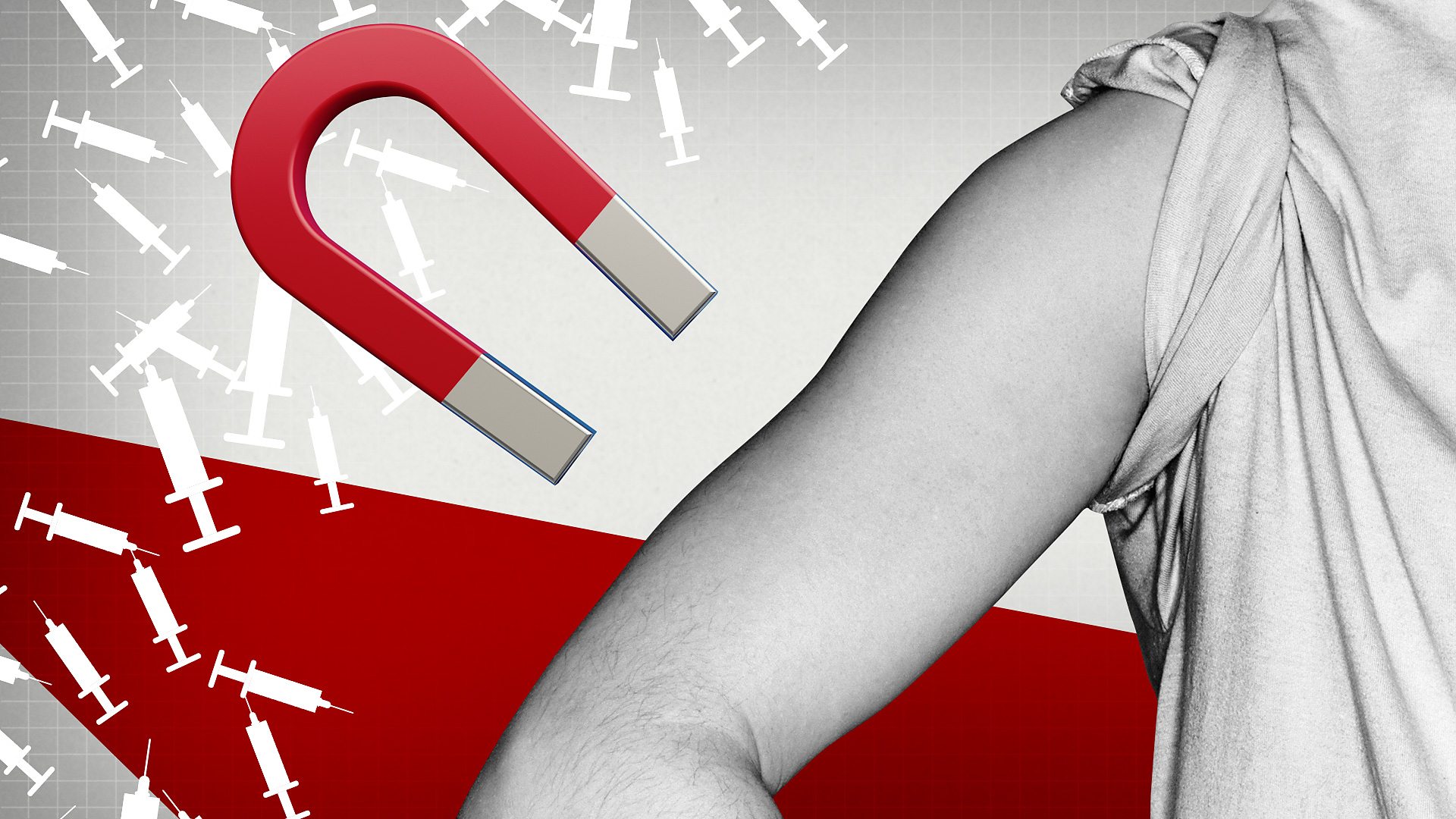 I’m afraid we have to talk about magnets and Covid-19 vaccines.

You may have heard the vaccines make you magnetic. But they do not. No matter what you might have seen in online videos with people hanging spoons off their faces, that spoon is clinging to them simply because metal sticks to sweaty skin. It’s a fun trick that’s as old as spoons.

Let’s talk about magnets. Pretty much everywhere you look, there is some device that uses them, so it’s important to at least have a basic understanding of how they work.

You might think that the magnet stuck on your refrigerator is the simplest example. Nope. Those are actually quite complicated. The most basic magnet is an electromagnet. Electric charges (like positive protons and negative electrons) create electric fields. But a moving electric charge creates a magnetic field. You can make electric charges move with just a battery and a wire. By connecting the wire from one end of the battery to the other, an electric current will flow, which is moving the charges.

If you want to see that this electric current creates a magnetic field, next put the wire over the top of a magnetic compass. You will see that the needle will point in a new direction, like this:Video: Rhett Allain

You can make the magnetic field even stronger by wrapping the wire around something made of iron. Now it’s an electromagnet. Here’s how to build the whole thing.

What About a Bar Magnet?

If you consider the magnet that’s stuck on your fridge, it doesn’t look like it has a battery or electrical current. So how does it create a magnetic field? I’ll be honest, things start to get complicated here. In order to figure out how this solid object makes a magnetic field, we have to go down to the atomic level.

All matter is made of atoms, and atoms are made of electrons, protons, and neutrons. All three of these act like tiny little magnets, and physicists characterize their properties using the term “magnetic moment.” (Yes, even the neutral neutron has a magnetic moment.)

Most atoms have a very low magnetic moment, but there are some that do produce a significant magnetic field. These elements are called ferromagnetic materials—some examples are iron, nickel, and cobalt. Some alloys and ceramics (which are not pure elements) are also ferromagnetic.

However, just having a ferromagnetic material doesn’t make something a magnet. If you grab an iron nail, it might not act like a bar magnet, but it can be turned into one fairly easily. That’s because in small regions of a piece of iron, nearby atoms interact magnetically and cause their magnetic moments to align. This region of aligned moments is called a magnetic domain. If you get all the magnetic domains pointed in the same direction, the iron will then act like a magnet.Illustration: Rhett Allain

So, how do you make it happen? Simple: You use another magnet. Putting a strong magnet near those unaligned domains will force them to line up. It’s actually possible to find rocks in the ground that are both ferromagnetic and have their domains aligned. We call these lodestones. They may have been magnetized by the strong magnetic fields created during a lightning strike.

Do Magnets Interact with All Metals?

If you grab a bunch of metal stuff around your house, most of it is probably steel (an alloy made from iron) or aluminum, copper, or brass. Oh, and your cast iron pot is of course made of iron. Of these, only the iron and some of the steel is attracted to magnets.Video: Rhett Allain

It’s important to remember that magnets only interact with ferromagnetic materials. If you were indeed a magnetic human, only a steel or iron spoon would stick to your head. Silver ones wouldn’t work.

Do the Covid Vaccines Contain Metals?

One of the arguments the people in these spoon videos are making is that Covid-19 vaccines have metal in them. In the Center for Disease Control and Prevention’s list of ingredients for the three Covid vaccines given emergency use authorization in the United States, the agency specifically points out: “All COVID-19 vaccines are free from metals such as iron, nickel, cobalt, lithium, rare earth alloys or any manufactured products such as microelectronics, electrodes, carbon nanotubes, or nanowire semiconductors.”

But the list does show that all three contain some form of sodium, including sodium chloride or sodium acetate, and one of them contains potassium chloride. Both potassium and sodium can be metals—does that mean there’s some kind of metal in there after all?

No, writes Naomi Ginsberg, an associate professor of chemistry and physics at UC Berkeley. “Potassium and Sodium are only metallic in solid form, but they are not solid as additives in the injected solution,” she told WIRED in an email. “The individual ions are dispersed in the solution, a liquid composed of mostly water and sparse, individual potassium and sodium ions, in addition to the active components of the vaccine. The ions in this solution are basically like dissolved salts, like are in Gatorade or Pedialyte, which our body needs to work properly but which get depleted during exercise.”

And, of course, neither potassium nor sodium is ferromagnetic. They couldn’t cause a magnetic interaction with normal objects.

So Then How Did They Do It?

Don’t those videos of someone with a spoon on their head prove that they are magnetic? No, they don’t. You can get an object—metal or not—to stick to human skin just because our sweat makes us a little sticky. (Some of us are stickier than others.) An object with a large, flat surface that has a greater contact area with the skin will be more likely to stay stuck. But no magnets are involved.

Are You Sure This Won’t Work?

OK, let’s take iron. It’s a ferromagnetic material that many people put in their body every day through fortified breakfast cereals. Yes, there’s actually iron in most of them, and to prove it, here is a classic at-home science experiment that you can try. Get your favorite cereal and grind it up. Put it in a cup with some water. Then put a magnet in. The magnet will attract the bits of iron in the cereal and you can pull them out. If you have a super strong magnet, it will work much better.

So, there’s your metal. It’s good for you. Also, no matter how much cereal you eat, it doesn’t make you magnetic.