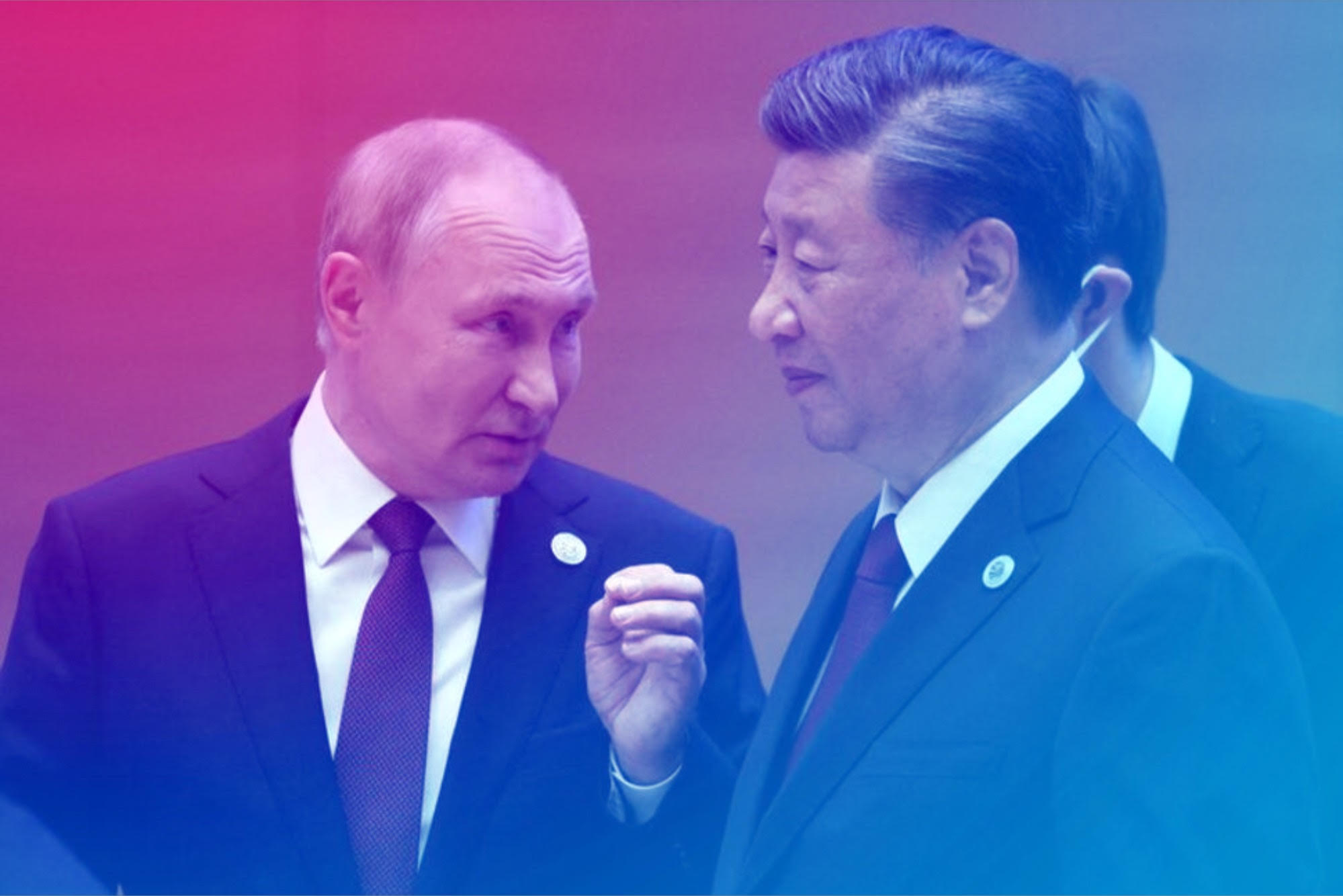 Soon after Russia invaded Ukraine, a Russian defense ministry spokesperson resuscitated debunked claims about a U.S.-funded bioweapons program in the region, accusing Ukrainian labs of experimenting with bat coronaviruses in an attempt to spark “the covert spread of deadliest pathogens.”

Disinformation is an old Russian government tactic. But this time Russia had help. Within days, Chinese officials and media outlets had picked up the lies and were amplifying and expanding on the biolabs yarn. The Chinese Communist Party tabloid Global Times created two splashy spreads, one sourced in part to Sputnik News, the other featuring a quote from Russian President Vladimir Putin. “What is the U.S. hiding in the biolabs discovered in Ukraine?” it screamed.

“China jumped on the biolabs conspiracy theory,” said Katja Drinhausen, an analyst with the Mercator Institute of China Studies in Berlin. Chinese officials and media outlets had spent the preceding months pushing the notion that the pandemic might have originated in a lab accident outside China. “It was like, here’s the perfect conspiracy theory coming out of Russia to support our ‘everywhere but China’ main talking point of the last year,” she said.

Since the war broke out in February, experts have been struck by a convergence in Russian and Chinese media narratives. While some of the convergence was likely happenstance, occurring when storylines aided both governments’ goals, documents found in a trove of hacked emails from Russia state broadcaster VGTRK show that China and Russia have pledged to join forces in media content by inking cooperation agreements at the ministerial level.

A bilateral agreement signed July 2021 makes clear that cooperating on news coverage and narratives is a big goal for both governments. At a virtual summit that month, leading Russian and Chinese government and media figures discussed dozens of news products and cooperative ventures, including exchanging news content, trading digital media strategies, and co-producing television shows. The effort was led by Russia’s Ministry of Digital Development, Communication and Mass Media, and by China’s National Radio and Television Administration.

In the propaganda agreement, the two sides pledged to “further cooperate in the field of information exchange, promoting objective, comprehensive and accurate coverage of the most important world events.” They also laid out plans to cooperate on online and social media, a space that both countries have used to seed disinformation, pledging to strengthen “mutually beneficial cooperation in such issues as integration, the application of new technologies, and industry regulation.”

“This is a master document of cooperation on media between the countries,” said David Bandurski, director of China Media Project, an independent organization that researches Chinese-language media. “The document allows us to see the process behind the scenes of how cooperation is planned and discussed by these particular ministries.”

VGTRK’s email system was hacked earlier this year when, in the wake of Russia’s invasion of Ukraine, hackers targeted more than 50 Russian companies and government agencies. The transparency collective Distributed Denial of Secrets has published more than 13 terabytes of documents from the hacks on its website. The Intercept and the Organized Crime and Corruption Reporting Project formed a consortium of news organizations to examine the files; previous stories that emerged from the documents include articles on Putin associate Evgeny Prigozhin, who founded and runs the Wagner Group, a Russian mercenary organization that is fighting in Ukraine.

The signatories to the 2021 agreement include large state media outlets as well as online media companies and businesses in the private sector. Among those who signed were the Chinese telecommunications giant Huawei, which has a streaming service; Migu Video, a gaming company under the state-run China Mobile; and SPB TV, a streaming service headquartered in Switzerland and owned by a Russian national.

The agreement lists 64 joint media projects that had either been launched or were in development. Some of these are lighthearted. In early 2021, CCTV and Riki Group launched a saccharine cartoon called “Panda and Krash,” about a panda and a rabbit in a toy store who zip off on adventures with a robot and an elephant in tow. “I encourage you and you help me,” they sing.

Other projects were more substantial. State news agencies TASS and Xinhua pledged to exchange reporting, and other state outlets agreed to publish supplements promoting the other country.

Chinese and Russian news reports suggest that the two countries have held annual media cooperation meetings since 2008. The partnership appears largely aimed at domestic audiences. But both China and Russia have massively expanded their overseas media presence in the past decade, and the agreement names outlets with a large international presence, including BRICS TV, RT, and Sputnik (all headquartered in Moscow), and the state-run Chinese outlets China Daily, Global Times, and CGTN. “The ambition is certainly global,” said Drinhausen, who added that despite notable differences in their foreign policies, both countries share a common cause. “In terms of an ideological pushback against the U.S. as the joint enemy, they are brothers in arms.”

Sources say that such agreements are inked partly for show, and that China has the upper hand in the partnership. “The Chinese control all the big projects,” said a Russian source with knowledge of the meetings, who declined to be named because of possible repercussions from their employer. “So far, they haven’t even figured out some basic issues like broadcasting our channels on Chinese cable.”

Indeed, some of the products discussed appear to be mainly of interest to China. TASS agreed to run interviews with Chinese leaders Xi Jinping and Li Keqiang and to organize events commemorating the 100th year anniversary of the Chinese Communist Party.  “What possible real interest can Russian audiences have in a photography exhibition to celebrate the CCP’s centennial?” said Bandurski. “What the Chinese government seems to be doing here is throwing a bunch of external propaganda products onto a giant wish list, hoping that Russia will help it tell its story.”

Meduza earlier reported that Russian state media, including the government paper of record Rossiyskaya Gazeta, was publishing more than 100 articles a month sourced from China Media Group, a state-owned media conglomerate whose coverage is mentioned several times in the agreement.

Some of those articles, such as a rote defense of the Chinese government’s actions in Xinjiang, appear out of place in the Russian media landscape. Russian state media coverage is generally less censored and more sophisticated than its Chinese counterpart, said Maria Repnikova, director of the Center for Global Information Studies at Georgia State University. “The propaganda genre is more dynamic in Russian state media, especially on TV, with a sophisticated play on emotions and disinformation appealing to many average Russian viewers,” she wrote in an email.

A month after the 2021 agreement was signed, a journalist from China Media Group wrote VGTRK’s general email address to pitch a partnership. “We can conduct corresponding interviews or reports according to your needs,” the journalist wrote in English, in one of the hacked documents. “At the same time, we can also transform your content accordingly and spread it widely in China.”

Hacked emails show that some journalists working for Russian state media helped amplify Chinese narratives. In March 2021, Alexander Balitskiy, Beijing bureau chief for RTR, VGTRK’s international service, sent a script for an upcoming segment on how people in China were boycotting foreign brands that had taken stances on forced labor in Xinjiang. “Global companies played on the same team with Western politicians, accusing China of the genocide of Uyghurs,” the script reads. Then, in parentheses, is a production note: “ZOOM OUT TO BEAUTIFUL VIEWS OF COTTON FIELDS BEING HARVESTED.” The script also outlines plans to include a quote from an earlier interview with Grayzone editor Max Blumenthal, who has denied Russian atrocities in Ukraine and defended Chinese state repression in Xinjiang; a quote from him did not make to the final cut of the news item available on VGTRK’s flagship news site Vesti.ru.

In an email, Balitskiy said he could not comment on the news segment because he doesn’t control how segments are edited when they are broadcast in different regions.

The payoff for Russia may have come after the invasion of Ukraine, when Chinese media echoed Russian government talking points on the war. “The coverage oftentimes didn’t even mention that it was Russia carrying out the attacks,” said Repnikova. Chinese outlets, she added, “adapted slogans directly from the Russian discourse.”

The hacked emails end in the spring of 2022. But over the past few months, the Russian government repeatedly brought the biolabs conspiracy theory to the United Nations Security Council, asking it to establish a commission to investigate. Amplifying its efforts was the Chinese press.

That may have been merely because the biolabs story aided China’s goals. The agreement does not chart detailed plans for sophisticated information operations. Such documents “are signed to publicly bolster the partnership, but the actual particulars are not worked out,” said Repnikova. “The vague wording might be deliberate, as it makes it harder to track the projects and to hold anyone accountable.”