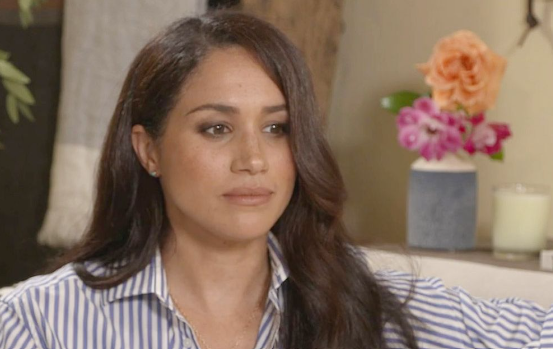 Meghan, Duchess of Sussex, is letting down her walls and opening up more and more about her low-key, joy-filled life with husband Prince Harry.

In a new interview with Variety, the mom of two spoke of her relationship with the late Queen Elizabeth II, her day-to-day with her husband and children, their upcoming docuseries, and much more. See below for the five biggest highlights from the chat.

Despite the complicated relationship Meghan and Harry seem to continue to have with the British royal family, Meghan said she is happy her relationship with the late queen was always a great one.

“I’ve reflected on that first official engagement that I had with her, how special that felt. I feel fortunate. And I continue to be proud to have had a nice warmth with the matriarch of the family,” Meghan said, remembering the monarch.

Following the queen’s death on September 8, Meghan and Harry joined the royals in mourning her. They attended her state funeral, vigil, and various ceremonies in her honor. Meghan also put her Archetypes podcast on hold during the official period of mourning.

“There’s been such an outpouring of love and support. I ‘m really grateful that I was able to be with my husband to support him, especially during that time,” Meghan said of attending the ceremonies for the queen with Harry and his relatives. “What’s so beautiful is to look at the legacy that his grandmother was able to leave on so many fronts. Certainly, in terms of female leadership, she is the most shining example of what that looks like. I feel deep gratitude to have been able to spend time with her and get to know her. It’s been a complicated time, but my husband, ever the optimist, said, ‘Now she’s reunited with her husband.'”

The duchess addresses her upcoming docuseries

Meghan and Harry are preparing for the release of their Netflix docuseries, being led by celebrated director Liz Garbus. The series will highlight their lives and projects today, as well as give viewers a glimpse into their love story.

“It’s nice to be able to trust someone with our story—a seasoned director whose work I’ve long admired—even if it means it may not be the way we would have told it. But that’s not why we’re telling it. We’re trusting our story to someone else, and that means it will go through their lens,” Meghan said.

There have been reports that it will be released around the time of Harry’s memoir, but nothing has been confirmed.

“It’s interesting. My husband has never worked in this industry before. For me, having worked on Suits, it’s so amazing to be around so much creative energy and to see how people work together and share their own points of view. That’s been really fun,” Meghan said.

Meghan breaks down people’s biggest misconceptions about her

The duchess spoke of her Spotify podcast, Archetypes, where she breaks down gender stereotypes, speaks of mental health, and preaches on the power of female sisterhood. In it, apart from highlighting her guests’ experiences, the former senior royal reveals bits and pieces about her own life and finds ways to relate to her guests’ stories.

It’s been a surprise for some to see her open up in such an honest manner after having been silent for years while she was a part of the British royal family. And because she still is a duchess, wife of a prince, and all in all California celebrity, Meghan said the biggest misconception people have of her is that she’s not a real person.

“I think that what happens, looking in from the outside, when there is this much noise, is that you become dehumanized. But if you remember that someone is a human being, then you don’t treat them, talk about them, look at them the same way. My hope for Archetypes is that people come out thinking, ‘Oh! She’s a real person! She laughs and asks questions and approaches things with curiosity,'” Meghan said.

Meghan reveals whether she would ever go back to acting

“No. I ‘m done. I guess never say never, but my intention is to absolutely not,” Meghan said.

The duchess left Suits to marry Prince Harry in 2018, when the series was on its 100th episode.

“I didn’t think I’d ever be in the entertainment industry again. But the entire culture has changed; streamers have changed things. The ability to create zeitgeist moments like we had in the ’90s—where everyone would tune in at the same time for a show or gather for one moment?—that doesn’t happen anymore,” she said.

Meghan added that to create a cultural moment or conversation that connects with people today requires something different, and she’s found a way to do that via her podcast.

“It might be one of the only remaining forums where people are alone to listen. Where else do you have that opportunity?” she said.

Meghan did not say why she’s done with acting, but in recalling her time in Hollywood, she spoke of the recent #MeToo era and how it was not a conversation people where having while she was a working actress.

“We didn’t have a name for it at that time. There were just certain things that were accepted. If there was any discomfort, you just dealt with it. It forced a lot of women to live with this idea of staying silent, not being disruptive, not giving voice to the things that might create concern or discomfort,” she said.

Getting to work on so many exciting projects with Harry—including their Archewell foundation, their Netflix deals, Meghan’s podcast, and Harry’s book—from home, while raising their two children, Archie, 3, and Lilibet, 1, has been a true blessing, Meghan said.

“We share an office. We work from home, as most people started to do during lockdown. It allows us to have significant time with our kids at this really special moment in their lives. We’ll never get this time back,” Meghan said.

On a normal day, she said, “I make breakfast, and we get the kids set for the day. We do a lot of joint calls and Zooms, but also try to divide what we can focus our energies on so we can accomplish even more.”

Though she and Harry have different working tactics, she said it all comes together wonderfully.

“My husband is on a 24-hour time zone, where half of your life is waking up as the other half is going to sleep. It’s kind of the reverse of what I went through living in the U.K. He’s very good at responding on text. Me, I try to be as fast as possible on email. I’ve always said, if it takes less than five minutes, do it now,” Meghan said.