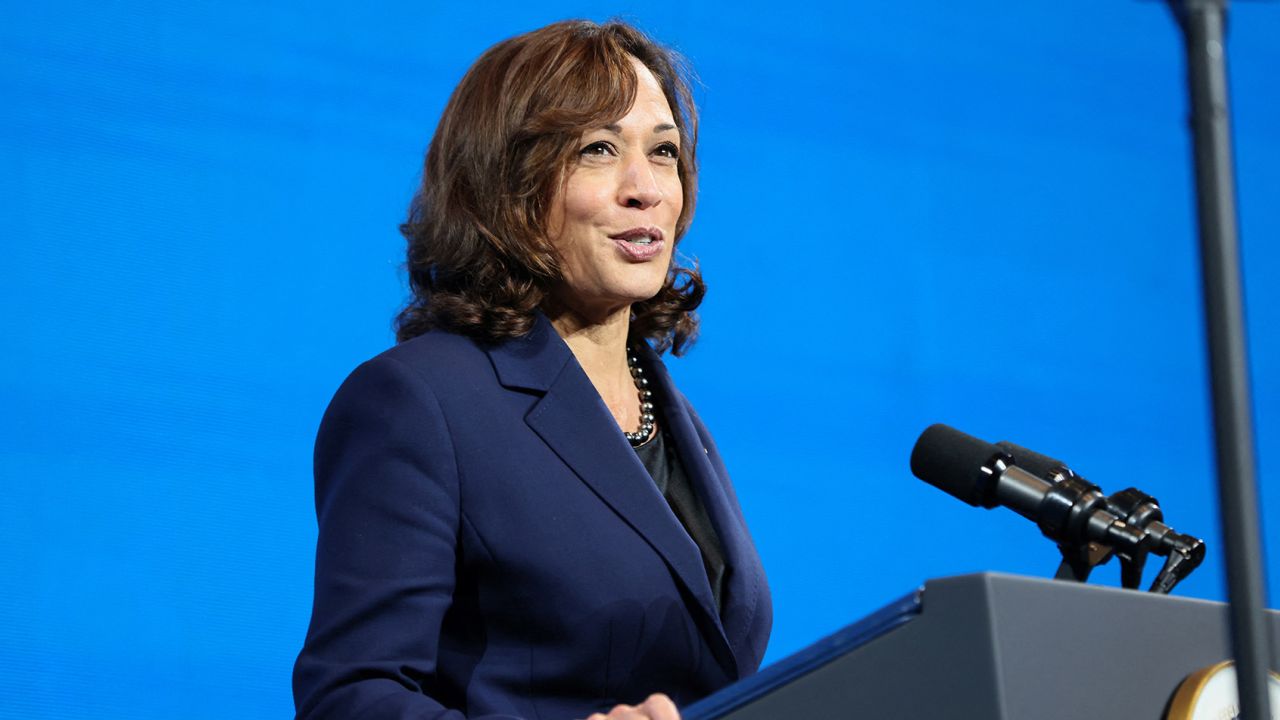 Vice President Kamala Harris is sticking close to her script when responding to what Democrats hope will once again be their greatest electoral mobilizer: Donald Trump and his third White House bid.

“The president said he intends to run and if he does, I will be running with him,” she told CNN on Tuesday – the first time she’d been asked about Trump’s 2024 candidacy, which he announced last week. She was addressing a gaggle of reporters aboard the Teresa Magbanua, a Philippine Coast Guard vessel stationed at the edge of the South China Sea.

Her cautious response at the end of a weeklong gaffe-free trip to Thailand and the Philippines could serve as a reflection of Harris’ vice presidency in its second year: toe the line but don’t make waves.

As she returns from Asia, she’s stuck in a swirl of uncertainty about her place in the party if the now 80-year-old President Joe Biden does not seek a second term. The President is expected to consider the decision over Thanksgiving and upcoming holidays with family, whose advice he’ll seek about running for reelection.

Harris’ trip to Asia – her third to the region since taking office – was another chance for America’s first South Asian vice president to showcase her ability to lead in the traditional ways of the vice presidency without overstepping her role as No. 2.

She attended a series of bilateral meetings and greetings with Asian prime ministers and presidents alike, including China’s President Xi Jinping, called a last-minute high-profile meeting with Indo-Pacific countries after North Korea launched a long-range ballistic missile hours before the Asia-Pacific Economic Cooperation (APEC) Leaders’ summit began and went on a symbolic visit to the Philippines’ archipelago island of Palawan, which could potentially heighten tensions with China.

With Biden in Washington, DC, for his granddaughter’s wedding, Harris continued her role as his top-ranking envoy in a trip meant to deepen ties to mostly friendly Asian nations and cast the US as the region’s best option for economic stability –part of an ongoing effort to counter China’s growing influence.

The vice president called the trip a success, as she brandished her policy chops in the region, attempting to fashion herself as a deft leader who speaks for Biden in his absence.

“It is very important that we were here today to restate the United States commitment to international rules and norms. This trip and this visit in particular has also been about demonstrating the strength and importance of our relationship with the Philippines both as it relates to economic issues and also security issues,” Harris said in Palawan, in a speech where she rejected China’s aggression in the South China Sea and announced funding initiatives ameant to beef up the country’s systems and deepen security ties.

Still, Harris’ events were tightly scripted and the trip itself, highly choreographed.

Harris’ “brief greeting” with Xi, as her office described it, was her first face-to-face meeting with the world leader, happening on the margins of APEC. It was likely Harris’ most high-profile moment of the trip, despite the lack of US press in the room to witness it. The vice president met with him just a week after Biden’s first in-person bilateral with Xi, which lasted three hours.

But unlike the president, who can share as much of a conversation as he pleases, there was an obvious limit to how much Harris felt comfortable sharing. She repeatedly declined to go far beyond what was written in a carefully calculated statement on her meeting with Xi.

“We discussed that we are keeping open lines of communication, that we do not seek conflict or confrontation, but we welcome competition,” Harris told reporters in a press conference wrapping up her trip to Thailand, dodging twice whether that conversation touched on North Korea or Taiwan.

If the goal was to remain gaffe free, the planning seems to have paid off. The Republican National Committee only clipped on Twitter moments thatmay have been awkward but didn’t lend themselves to real criticism –unusual treatment for one of their most attacked Democrats.

On the first day of APEC, a “deeply concerned” Harris rushed aides to convene a last-minute unannounced multi-lateral emergency meeting with Indo-Pacific region allies, according to a senior administration official, after North Korea launched a long-range ballistic missile Friday morning– her second most high-profile moment of the trip.

Harris directed her team once she was briefed on the latest launch, a White House official said utilizing the Indo-Pacific nation’s presence at the APEC Leaders Summit to do so. At the head of a u-shaped table inside a small room in the Queen Sirikit National Convention Center, the vice president accused North Korea of “brazen violation of multiple UN security resolutions.”

“This conduct by North Korea most recently is a brazen violation of multiple UN Security resolutions. It destabilizes security in the region, and unnecessarily raises tensions. We strongly condemn these actions, and we again call North Korea to stop further unlawful destabilizing,” Harris said. “On behalf of the United States, I reaffirmed our ironclad commitment to our Indo Pacific Alliance.”

Her statement closely tracked one the National Security Council issued hours earlier on Biden’s behalf, almost to a tee.

The last-minute nature of the meeting caused aides to move quickly to corral the US press, but without time to pre-set cameras, press from the US, Japan, Australia, New Zealand and Korea were fighting for an angle – causing the photo-op visuals to be at times shaky and askew.

Still, it was a moment that looked almost presidential for Harris as it was reminiscent of the emergency in-person meeting Biden convened with top allies during his final day at the G20 in Indonesia, when a Russian-made missile fell inside the borders of a NATO ally.

But the presidential posturing had limits. During the weeklong trip, the vice president only answered political and policy questions on two separate occasions from the group of all women reporters traveling with her from Washington – taking two or three questions each time.

Harris didn’t stray from talking points in her answers, careful not to move beyond Biden’s position on a multitude of issues.

Harris has long sought opportunities to showcase her own interests and craft her own lane as a younger vice president with potential presidential ambitions.

Domestically, she has taken the lead for the administration on abortion rights. And on foreign trips, Harris has told aides she wants to go outside of the box when it comes to the schedule. A major part of that has been to meet with women and families in different countries.

That directive was evident in Manila, when she participated in a moderated conversation about women’s empowerment and entrepreneurship inside a ballroom in the Sofitel.

In the Palawan fishing village of Tagburos, Harris watched women clean fish in front of a picturesque backdrop to talk about the devastation climate change and illegal fishing has had on the village.

“Hi ma’am,” they yelled as she approached. Harris’ translator introduced the women as her best friends.

“Best friends,” Harris said, with a laugh and a wave.