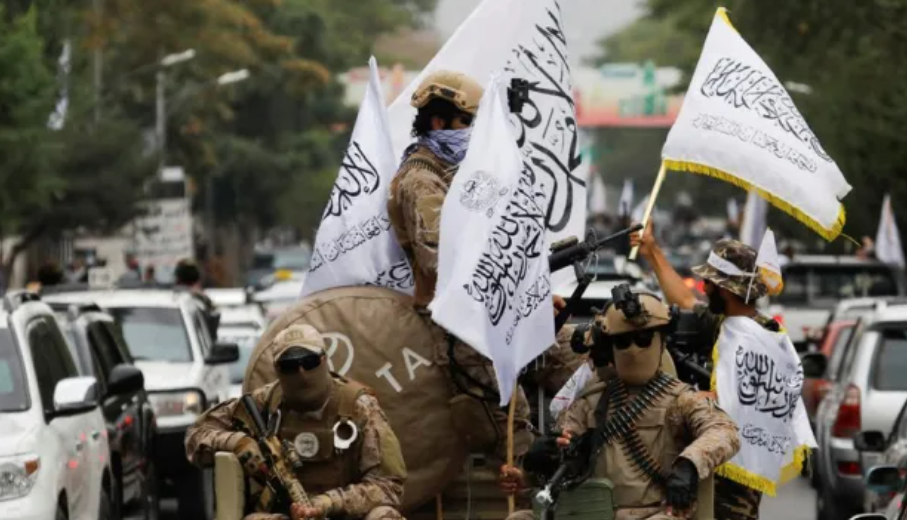 Three women were among 14 people publicly flogged in front of hundreds at a soccer stadium in eastern Afghanistan on Wednesday after the terrorist group invited residents on social media to watch the punishment in person.

The individuals who sustained the lashings — between 21 and 39 lashes — we accused of committing crimes including adultery and theft, and took their punishment in the city of Pul Alam, located in the country’s Logar Province, The Telegraph reported.

“Fourteen people, including three women, were lashed in the presence of scholars, authorities and people … for different sins including adultery, robbery and other forms of corruption in a football stadium in Logar [province],” said the Taliban’s Supreme Court.

A Taliban spokesperson, Omar Mansoor Mujahid, said the three women were released after receiving their lashings, but some of the men were jailed.

The lashings are the second confirmed use of such punishment since the Taliban’s Supreme Leader, Hibatullah Akhunzada, announced the return of a strict interpretation of Islamic Sharia law last week.

When the Taliban ruled the region in the 1990s, the terrorist government used soccer stadiums to carry out public executions and stonings to discourage dissent.

In separate lashings in August, The Telegraph reported that five people, including two women, were whipped, according to statements released by Taliban officials in the Zabul province.

In August, Voice of the Martyrs designated Afghanistan as a “restricted” nation in its annual Global Prayer Guide, saying the government has been “highly antagonistic” toward Christians, who have been increasingly targeted by violent extremist groups since the Taliban took control.

“Although waves of Christians have moved to neighboring countries to worship openly, Afghan house churches continue to grow,” says the guide, adding that a small number of Christians “are martyred every year in Afghanistan, but their deaths generally occur without public knowledge.”

A man and woman that were reportedly living together and engaged in a sexual relationship were flogged 39 times for committing adultery under Sharia law. The pair were sentenced to two and six years in prison, respectively. A woman who lived in the same building as the couple received 20 lashes and was sentenced to six years in prison for allegedly allowing the relationship to occur. Two other men received 20 lashes and a year in prison each after they were arrested on charges of robbery.

In May, Akhunzada decreed that Afghan women must resume wearing full-body coverings in public, another restriction imposed upon women since the group resumed control of the region in August 2021 after the Biden administrationwithdrew all troops from the country but left behind $7 billion worth of military equipment behind that he Taliban seized.

“They should wear a chadori [head-to-toe burqa] as it is traditional and respectful,” the Taliban’s supreme leader said in the decree.

The Taliban forced women to wear burqas when it previously controlled the region. While some Afghan women continue to wear headscarves today, many in urban areas like the city of Kabul do not cover their faces.

According to the decree, fathers or close male relatives could be fired from their jobs or imprisoned if a woman in their family does not conceal her face when in public.

“While more than 35 [million] people are on the edge of starvation, the Taliban’s only priority seems to be women’s clothing,” former Afghan Parliament Member Fawzia Koofi wrote in a tweet on May 7. “Women of Afghanistan have always dressed up according to Islamic principles. Burqa is a traditional wear and has always been an individual choice and never compulsory in Islam.”

Before reimplementing the dress code, the Propagation of Virtue and Prevention of Vice ministry imposed travel restrictions on Afghan women in December. Under the restrictions, women are forbidden from journeying more than 45 miles without a male relative.

At the annual International Religious Freedom Summit in Washington, D.C., last summer, Azra Jafari, who formerly served as mayor of Nili in Afghanistan’s Daykundi province, urged the U.S. government to declare the Taliban’s treatment of the Hazara ethnic group a genocide.

Jafari, who was appointed the first female mayor in Afghanistan in 2008 and held the post until 2014, told The Christian Post that after the Taliban took control of Afghanistan, the situation on the ground has turned bleak for women and her Hazara ethnic group.

Hazaras are a predominantly Shia Muslim ethnic group of over 3.5 million that primarily reside in central Afghanistan. The ethnic group has long been subject to violence at the hand of state actors and militant groups and is considered by some to be historically the most discriminated against ethnic group in Afghanistan.

The Taliban has engaged in a deliberate campaign to “kill and then displace” members of the ethnic group from their homes, she added. “This is like a genocide against Hazaras.”