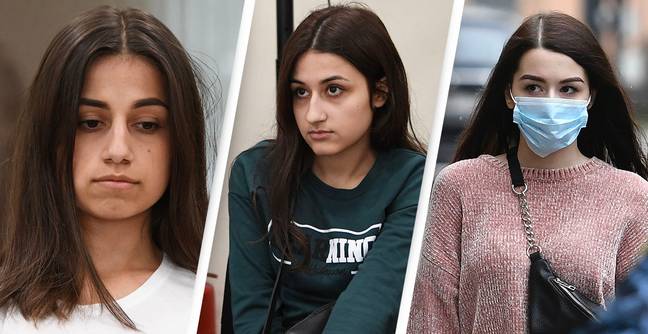 The three girls stabbed their father to death in 2018, but in light of new psychiatric evaluations, they may not have to spend time in jail for killing their ‘monster’ dad.

Sisters Krestina, Angelina and Maria Khachaturyan stabbed their father in their block of flats after claiming they had suffered years of abuse and ‘systematic torture’ from him.

The trio, aged 19, 18 and 17-years-old admitted to using their father’s hunting knife to kill him.

Their father, Mikhail Khachaturyan, aged 57, was branded an ‘evil sex abuser’ after he was reportedly found stabbed ‘dozens’ of times by the lift in the family’s block of flats.

The eldest two sisters are facing murder charges, while the youngest sister Maria was declared mentally unfit to stand trial.

However, due to new psychiatric evaluation from Russian experts, the sisters could be cleared of their father’s murder, The Sun reports.

The evaluation has reportedly shown the sisters were all suffering from Post Traumatic Stress Disorder (PTSD) at the time of the killing. It claims they were in an ‘unstable’ psychological state and feared for their lives.

The experts found that each of the girls since 2014 suffered from abuse syndrome and post-traumatic stress disorder – all of these conditions have a direct causal relationship to Khachaturian’s actions.

According to the Serbsky Institute of Psychological Psychiatric and Medical Examination, if the three sisters did not agree to their father’s demands he would make death threats against them.

The examination also stated that Mikhail had ‘special sexual preferences aimed at his own daughters’. It called him a ‘tyrant’ and spoke of manipulation tactics including threats, violence, humiliation and ‘beatings, mocking them, and physical and sexual abuse’ towards the three girls.

According to reports, evidence showed Mikhail even threatened one of his daughters with marriage, saying she would ‘take the place of your mother’ and ‘give birth’ to his baby.

An expert involved in the evaluations detailed how Mikhail would order the girls to ‘get undressed in front of him saying that he wanted to ‘check’ them’. Adding, ‘Then [he] ordered them to sexually pleasure him, saying that he had problems with his prostate and it would be a cure.’

The sisters have been accused of lying by other family members, who have said Mikhail did not sexually abuse them and that they killed him for his money.

The lawyer for relatives of Mikhail, Olga Khalikova, argued the branding of Mikhail as a ‘paedophile’ is ‘based solely on the testimony of the accused’ and subsequently impossible to establish ‘on the words of the accused alone’.

In 2019, Ksenia Sobchak, a former Russian presidential candidate, spoke out about the case. She said if the sisters were imprisoned it would be a ‘disgrace to Russian justice’. Sobchak called the girls victims of a man with proven ‘serious mental health problems’.

The sisters are set to argue that the murder was an act of necessary self-defence. Furthermore, due to the recent evaluations, their lawyers are reportedly hoping they will subsequently be cleared of the charges.

However, if the sisters are not cleared, the eldest two, Krestina and Angelina, face between eight and 20 years in prison.

If you’ve been affected by any of these issues and want to speak to someone in confidence regarding the welfare of a child, contact the NSPCC on 0808 800 5000, 8am–10pm Monday to Friday, 9am–6pm weekends. If you are a child seeking advice and support, call Childline for free on 0800 1111