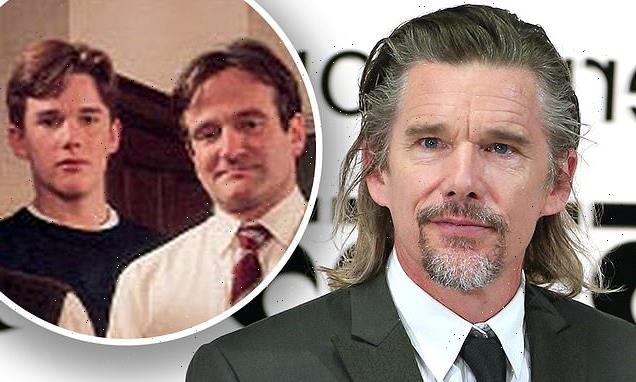 There are quite a few words that come to mind when thinking about the legendary Robin Williams. Working with him could probably be intimidating, enlightening or even just goofy.

But seasoned actor Ethan Hawke looks back on an experience with the actor as “irritating.” Not the word you’d think would come to mind.

The late Williams was known for his comedic fluidity. He’s a beloved family character for his work as “Genie” in Disney’s “Aladdin.” He made us laugh and cry in “Mrs. Doubtfire.” And his dramatic performances in films like “Good Will Hunting” and “Patch Adams” showed the depth of his skills.

Wildly spontaneous and full of energy, the actor captivated crowds. Both as a comedian and an actor, he could elevate otherwise simple performances.

It was during the filming of the 1989 classic “Dead Poet’s Society” that a young Ethan Hawke described his experience. Hawke was just burgeoning on a career and learning the ins and outs of acting at the time. It was a solid breakout role – and one that kept him on a track to extreme success in Hollywood.

However, Williams seemed to always be cracking jokes on set. This absolutely irked Hawke, who was trying to ear his chops in the film world.

“He had a habit of making a ton of jokes on set,” Hawke said of Williams, according to TooFab. “At 18, I found that incredibly irritating. He wouldn’t stop and I wouldn’t laugh at anything he did.”

He went on to add:

“There was this scene in the film when he makes me spontaneously make up a poem in front of the class,” Hawke recalled. “He made this joke at the end of it, saying that he found me intimidating. I thought it was a joke.”

While Williams’ process was a bit unusual, Hawke learned the actor actually garnered a huge range because of his comedic background.

“As I get older, I realize there is something intimidating about young people’s earnestness, their intensity,” said Hawke. “It is intimidating — to be the person they think you are. Robin was that for me.”

Further, Williams would be the one to help Hawke get an agent and pursue more works in the industry. Hawke has gone on to become a major Hollywood A-lister, starring in films like “Training Day”, “Before Sunrise” and its subsequent sequels, “Sinister”, “Boyhood” and other works. The actor has also written and produced, earning tons of accolades for his work including an Oscar nomination.

And while Williams passed in 2014, that famous “O Captain! My Captain” line has fans around the world still feeling his performance in “Poets”, where Hawke got his start.