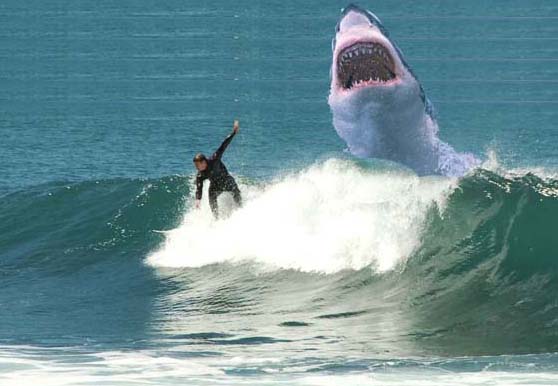 A shark has been filmed bursting out of the sea with a quadruple spin, after riding the same wave as a nearby surfer.

The animal’s impressive acrobatics, of which any diver or gymnast at the recent Tokyo Olympics would have been proud, happened off the South Carolina coast last week.

Kaci Allen identified the surfer as her 15-year-old son, Ethan, whom she called “E.”

“I didn’t even realize we’d captured the shark jumping up right after he pulled his feet up on the board!” she posted on Facebook on Thursday.

She later added: “I didn’t see this one until he was scrolling through videos! … Seriously though, (as) soon as E pulled his feet up! … We’ve seen sharks in the water before, but never captured video of one; they’re fast!”

One comment in response, posted by Holly Hardison Pring, read: “That shark knew you were filming and said, watch this!”

While another by Natashia Hendel, said it was “the craziest video” and that she was “glad the shark came to play and not eat!”

The shark is thought to be a young spinner shark, according to local newspaper The Charlotte Observer, which first reported about the video.

Spinner sharks (Carcharhinus brevipinna)—a common species off the South Carolina coast—speed through the water vertically while spinning when trying to feed, according to the charity Shark Trust.

Conservation organization Oceana notes that the species is a “fast and agile predator,” with adults growing to between 6 and 10 feet in length.

“The spinner shark feeds unlike any other shark species by spinning out of the water in quick bursts of speed to catch a meal,” its profile states.

“This shark is not a deep-sea swimmer, but instead prefers inshore to offshore waters no more than 350 feet deep, and juvenile spinner sharks may move into shallower bays with tides. Spinner sharks will grow to be about.”

The sharks have been spotted around the world and are targeted by some commercial fishers. It is listed as “near threatened” by the International Union for Conservation of Nature (IUCN) Red List.

South Carolina high school teacher Nikki Colwell caught the shark in April, reeling it in with her hands after the animal broke her fishing rod mid-catch.

“When we finally got it to the boat, that is kind of when it went crazy,” Colwell told The State newspaper at the time. “It was crazy…I’ve never had a rod break.”

One thought on “Shark Joins Surfer on Wave Before Leaping in Air, Spinning Four Times”