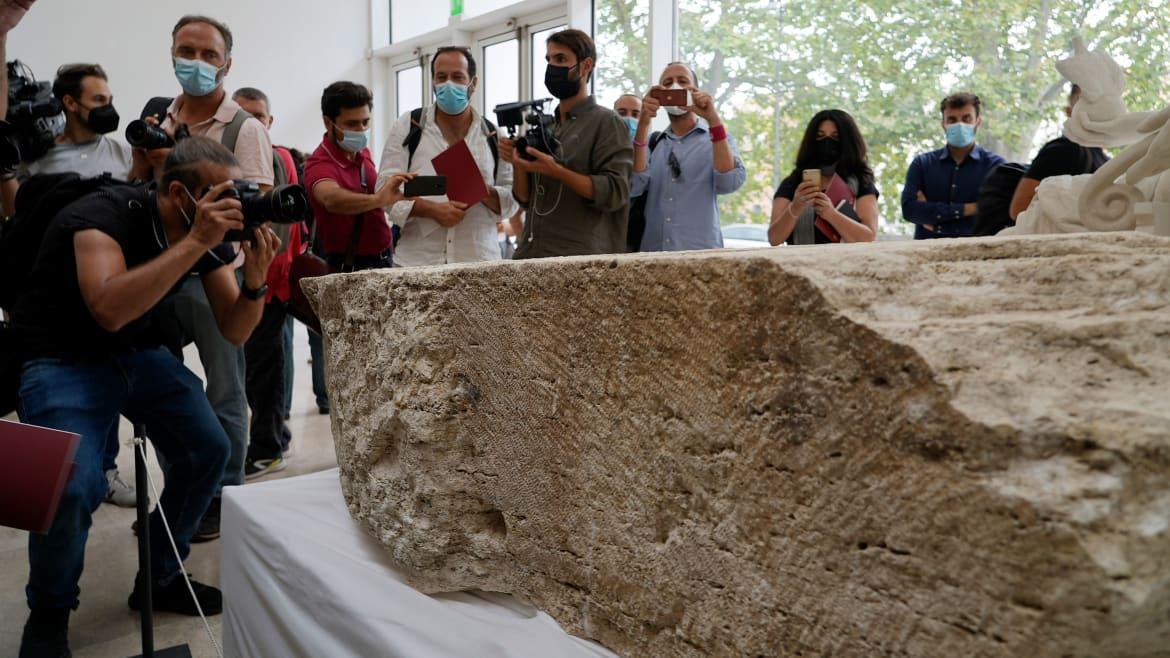 Earlier this month a rare almost 2000-year-old border stone from the reign of the Emperor Claudius was unearthed in the city of Rome. The stone, technically known as a pomerium cippus (boundary stone), marked the sacred limits of the Roman Empire’s capital city and dates to 49 A.D., when Claudius expanded the boundary of the city.

This wasn’t a simple property marker, it was part of a series of stones that divided the urban civic world of Rome from the military powers that lay outside it. Even more interestingly it is inscribed with now-lost ancient letters invented in the first century. As the first discovery of its kind in almost a century, the discovery created a media firestorm.

While border stones are well known to scholars, this one is noteworthy for being discovered in situ. It was discovered during excavations for a new sewer system underneath the recently renovated Mausoleum of Augustus in Rome’s historic city center. In antiquity the stones marked the pomerium, the sacred boundary that soldiers were forbidden to cross with weapons.

At a press conference, Claudio Parisi Presicce, director of the Archaeological Museums of Rome, said that, “The founding act of the city of Rome starts from the realization of this ‘pomerium.’’ The stones, in other words, are part of what founded and defined Rome.

The enlargement of the pomerium in 49 A.D. had some practical effects on the city. The 139 border stones laid by Claudius now incorporated the Avertine hill, which previously lay inside of the city walls but outside of the pomerium, with the result of reconstituting Rome as the seven hilled city that we know today.

Dr. Lisa Marie Mignone, a research affiliate at the Institute for the Study of the Ancient World at NYU, and author of an important study of the border stones published in Historia, told The Daily Beast that “[Claudius’s] goal was not to increase the civic space of Rome, so much as to celebrate his expansion of the Roman Empire itself.”

All the stones that marked the new boundary bear the same inscription, which states that Claudius (and his many official titles) “extended and redefined the pomerium because he had increased the boundaries of the Roman people.” The expansion of the boundary matched the expansion of the empire. Claudius, Mignone said, had overseen the annexing of several provinces in the east but his major accomplishment was the capture of Britain.

Despite the large celebratory procession (known as Triumph) and arch he was granted in the city as a result, these conquests were hundreds of miles away. Extending the pomerium was “a sacral, topographical, and physical way to showcase at Rome his renewed expansion of the boundaries of the Roman Empire.” It was a way of marking his control over both foreign, domestic, civic, and sacred space.

In addition, Claudius’s expansion of the pomerium cleared up a great deal of confusion. As Mignone told me, first-century Roman historians were unclear about where the boundary actually lay until Claudius redefined it. Ancient commentators like the Seneca and Aulus Gellius struggled to explain why the Avertine hadn’t been included within the sacred city from the start and could only suggest that it was an ill-omened location and that there was no clear explanation.

One of the distinctive features of the inscription is its use of the digamma, a now obsolete letter that—according to the ancient tabloid writer Suetonius—was Claudius’s own invention. It was one of three letters that Claudius introduced into the Roman alphabet: the antisigma Ↄ or ↃϹ, which resembles a backwards C or back-to-back Cs (yes, like the Chanel logo) ; Ⱶ a half H which seems to have been a short vowel sound; and the digamma Ⅎ a turned F that represented a consonantal U and sounded like a “w.” Suetonius tells us that Claudius even wrote a book to explain the theory behind them.

The letters quickly fell into disuse but they were a part both of Claudius’ antiquarian interest in the esoteric and a growing first century CE interest in linguistic symbols and their function. In her excellent book Empire of Letters, MIT associate professor Stephanie Frampton explains that Claudius’ introduction of new letters was seen as part of a tradition whereby language and the alphabet developed over time. Tacitus tells us that it was once Claudius “discovered that not even Greek writing was begun and completed at one time” that he decided to design “some additional Latin characters.”

Unlike those devised by other peoples, however, they didn’t catch on. Ironically, even the sizeable power of the emperor could not guarantee that people change the alphabet. It’s only on border stones and similar imperially mandated inscriptions that we can see evidence of Claudius’s failed innovation. His display of power is also a testimony to the limits of his authority.

Perhaps the most exciting aspect of the discovery, said Mignone, is the relationship of the stones to the Mausoleum of Augustus. Corpses were polluting objects in antiquity and, thus, burials were supposed to take place outside of the sacred city-limits. “Was Augustus’ massive tomb outside Claudius’ pomerium or within it? Was Augustus’ burial spot (which subsequently also interred Claudius’ ashes as well) exempted from [this] exclusion due to the fact that Augustus was an emperor and thus enjoyed special rites and privileges?” Mignone cautioned us from reading too much into this, however. While many Italian news reports, she said, emphasized this issue, “the ancient evidence indicates that dead bodies were to be buried outside of the inhabited city limits, not the pomerium per se.”

The publication of an official site report will hopefully bring clarity to some of the uncertainties and shed light on the relationship between the expansion of the pomerium and the tomb of Augustus. Given that this is a rare example of a border stone found in the same place it was erected, Mignone hopes that further archaeological analysis will reveal more about the maintenance of the boundary and for whom it was important.

Were the stones cleaned and maintained? How significant were they to people outside of religious officials or military generals? Right now, what is clear is the boundary’s utility for emperors themselves. Claudius monopolized the sacred boundary in new ways in order to celebrate and exhibit his accomplishments. This novel use of topographical markers was something that later generations emperors and politicians would also exploit. As any immigrant today knows, boundaries and boundary marking are always displays of power.