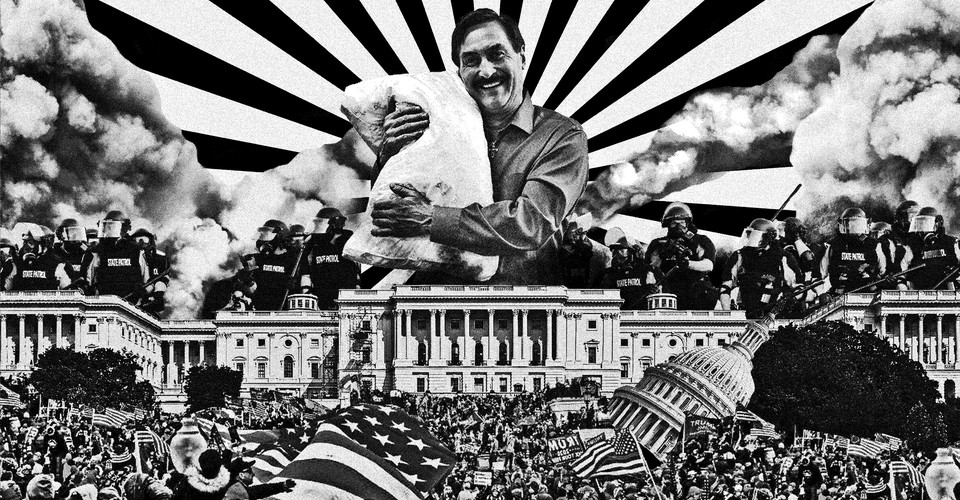 MyPillow CEO Mike Lindell, on the final day of his “cyber symposium,” remained unable to produce any tangible evidence of widespread voter fraud in the 2020 election. He attempted to deflect blame for his failed event onto supposed antifa activists — or, actually, “antifa things” — who were nowhere to be seen in this Great Plains city of 177,000 residents.

The pillow tycoon, alongside self-proclaimed “information warfare” specialist Col. Phil Waldron, took to the main stage early Thursday to decry the invisible opposition force he claims has hijacked this event, which he has promised for months would offer “absolute proof” that the election was stolen from Donald Trump.

“We’ve got antifa things, or people that have infiltrated, they’re telling me this morning,” Lindell said. “I just want everyone to know all the evil that’s out there. I’m OK. It hurts a little bit.”

Well, it was only a matter of time before Mike Lindell just straight up blamed “antifa” for his symposium crashing and burning. pic.twitter.com/kvk6zusUIC— Justin Baragona (@justinbaragona) August 12, 2021

“This is where our country’s gone,” Lindell continued. “You take away the free speech. So they go after me. And they’re going, ‘Well, we try and crush his company and take everything from him.’ And then they go after [me] physically.”

It’s not clear in what sense Lindell believes he has been deprived of free speech, which he continues to exercise vigorously. He went on to say he now has a team of bodyguards protecting him, claiming that he was “attacked” late on Wednesday night outside his Sioux Falls hotel. He did not provide details, and so far the alleged incident has not been independently verified.

“Now I’ve got to go around with a bodyguard,” Lindell said. “And I don’t like bodyguards. I like to have American freedom to drive around, to do what I want, to not worry, to be able to take pictures with people.”

Mike Lindell not only claims that he was “attacked” outside of his hotel, but a staffer adds that “really radical folks outside [are] trying to penetrate,” despite a street preacher being the only person outside.— Zachary Petrizzo (@ZTPetrizzo) August 12, 2021

The purported presence of antifa has been the subject of many rumors among organizers and attendees of Lindell’s “cyber symposium,” although no such radical infiltrators have been visible at any point. A security guard at the Lindell event, asked by Salon on Tuesday afternoon about the abundance of security checkpoints, said there was concern over “guns” and “antifa” making it into the gathering.

On Thursday morning, Waldron claimed that “really radical folks outside [are] trying to penetrate” the event. No anti-fascist activists were visible outside the auditorium unless one counts the three people singing gospel numbers.

Instead of “antifa” being outside, merely three people were preaching deep in singing gospel songs.

With Mike Lindell’s organizers claiming that “antifia” is trying to infiltrate their event, I decided to go outside, and all I saw in the parking lot were people preaching and deep in song. pic.twitter.com/Pwffp6F574— Zachary Petrizzo (@ZTPetrizzo) August 12, 2021

On Wednesday night, the Washington Times reported that Josh Merritt, one of Lindell’s supposed election fraud experts, described Lindell’s data as a “turd” that the cyber team was asked to polish “into a diamond.” As of Thursday afternoon, Lindell had not released the “packet captures” (PCAPs) from the 2020 election that he had long promised, or any other hard data to support his claims of systematic fraud.

Day 3 of the cyber symposium begins with an announcement that there was a “threat to the data streams.” Lindell insinuates that Antifa may be behind the “attacks.” He also has more advice for journalists: “you need to report the truth.”— Khaya Himmelman (@KhayaHimmelman) August 12, 2021