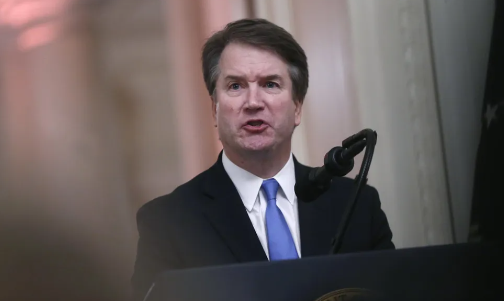 A secretly made documentary expanding on allegations of sexual assault against supreme court justice Brett Kavanaugh has premiered at this year’s Sundance film festival.

Justice, a last-minute addition to the schedule, aims to shine a light not only on the women who have accused Kavanaugh, a Donald Trump nominee, but also the failed FBI investigation into the allegations.

The film provides a timeline of the allegations, initially that Kavanaugh was accused by Christine Blasey Ford of sexual assault when she was 15 and he 17. She alleged that he held her down on a bed and groped her, and tried to rip her clothes off before she got away. Kavanaugh was also accused of sexual misconduct by Deborah Ramirez, who alleged that he exposed himself and thrust his penis at her face without her consent at a college party.

Kavanaugh denies the allegations. He turned down requests to take part in the documentary.

The first scene features Ford, half off-camera, interviewed by the film’s director Doug Liman, whose credits include Mr and Mrs Smith and The Bourne Identity. Justice features a number of interviews with journalists, lawyers, psychologists and those who knew Ford and Ramirez.

“This was the kind of movie where people are terrified,” Liman said. “The people that chose to participate in the movie are heroes.”

In the film, Ramirez, who previously told her story to Ronan Farrow in the New Yorker, also shares her story on-camera. Ramirez is referred to as someone “they worked hard for people not to know”, her story never given the space it deserved until long after Kavanaugh was confirmed to the court in October 2018.

Ramirez details a Catholic upbringing, before explaining that her high grades got her into Yale when the university was slowly diversifying its student body in the mid-80s. As well as being admitted only 15 years after women were allowed in, Ramirez was also biracial and working class. “My mum was concerned,” she recounts, emotionally, in the documentary.

Friends at the time refer to her as “sweet and Bambi-like” and “innocent to a fault”, but Ramirez tried to fit in by becoming a cheerleader and by drinking with her peers. This, she says, brought her into the orbit of Kavanaugh, who came from a privileged family and was known as a heavy drinker at the time (he is referred to in the film as someone who was usually “more drunk than everyone else”). Ramirez recounts the alleged event, when she was intoxicated and, she says, made, without her consent, to touch Kavanaugh’s penis, which he had placed near her face.

The film then details how the circles around Ramirez and Kavanaugh responded, showing text messages of a discussion when Ramirez’s allegations were about to go public, of a mutual friend being asked by Kavanaugh to go on record to defend him. Another friend refers to it as “a cover-up”.

The New Yorker included a statement from a group of students at the time in support of Kavanaugh. A year later, the film shows that two of them emailed the New Yorker to remove their names from the statement.

Ramirez’s lawyers claim they contacted Republican senator Jeff Flake, who was involved in Kavanaugh’s confirmation hearings, to explain what happened to her. The next day Flake called to delay the confirmation and insist on a week-long FBI investigation.

But the film details how the FBI failed to call on the many witnesses recommended by Ramirez’s lawyers. Footage is shown of the film-makers meeting with a confidential source who plays tape of Kavanaugh’s classmate Max Stier, now a prominent figure in Washington running a non-profit, who allegedly witnessed Kavanaugh involved in a similar act of alleged drunken exposure with a female student at a dorm party at Yale. The woman has chosen to remain anonymous and this is the first time this recording has been heard.

It was made during the week the FBI investigated Kavanaugh, and despite Stier notifying them, they failed to speak to him. “You don’t talk to that guy, you’re not talking to anybody,” Liman said during the Q&A.

The FBI tip line that was set up is referred to as “a graveyard”, with 4,500 tips sent straight to the White House rather than being investigated. It’s referred to as another “cover-up”.

The film-makers also spoke to other accuser who alleged misconduct but could not be included in the film. “We did speak to people who had other allegations, and we were very careful and thorough, and it’s not for disbelieving them – but the stories you see here are the ones you are able to corroborate,” Herdy said to the audience.

Justice was made in secrecy over the last year, with NDAs signed by everyone involved. The project was self-funded by Liman, making his documentary debut. He told the Hollywood Reporter that the supreme court holds “special meaning” to him, his father having been a lawyer and activist and his brother a federal judge. He was frustrated by the FBI investigation into Kavanaugh that “never happened”, and sought the help of renowned documentary producers Liz Garbus and Herdy, both with specialised experience of films about sexual assault allegations, to do the work that he saw as unfinished, if barely started at all.

At the Q&A, he expressed the importance of secrecy, speaking about “the machinery that’s put into place against anyone who dared to speak up” and an awareness that this machinery would be turned on the film if it was made public.

“There would have been some kind of injunction,” he said. “This film wouldn’t have been showing here.”

It was only screened to Sundance high-ups on Wednesday before being officially announced on Thursday. It premiered to a sold-out cinema on Friday.

In the past few years, the festival has become a regular home to a number of investigative documentaries about alleged sexual predators in the public eye. Figures such as Michael Jackson, Bill Cosby, Russell Simmons and former Sundance mainstay Harvey Weinstein have all been spotlighted.

Since the announcement of Justice, Herdy confirmed they have been “getting more tips”, which started arriving just 30 minutes after the press release went out. Liman added that the film, which is seeking a distributor, will now possibly need to be extended and re-edited.